This year’s winners are announced on two nights of The One Show, May 8th and 10th, 2019, during The One Club’s Creative Week in New York.
Wieden+Kennedy “Dream Crazy” for Nike wins Cultural Driver Gold, recognizing influential ideas and executions that had a major impact in their respective cultures and environments, and exist outside the traditional categories in advertising and design.
NEW YORK
--(SPW)--

adam&eveDDB, Droga5 New York and McCann New York were the leading Gold Pencil winners on the first night of The One Show 2019, the prestigious global awards program from The One Club for Creativity celebrating excellence in creativity of ideas and quality of execution.

The top Gold Pencil winner on this first night of The One Show 2019 was adam&eveDDB London with Campaign Against Living Miserably (CALM) London and This Morning ITV London with eight, all for “Project 84” for CALM.  The agency won three Golds in Health Wellness & Pharma, two in Creative Effectiveness, two in Design and one in Public Relations.

Droga5 New York picked up seven Gold Pencils, including four for The New York Times “The Truth Is Worth It” in Moving Image Craft (one of them with Furlined Santa Monica), two for Tourism Australia “Dundee: The Son of a Legend Returns Home” (one each in Branded Entertainment and Public Relations) and one with Wieden+Kennedy New York and Bud Light New York for HBO “Game of Thrones x Bud Light - Joust” in Branded Entertainment.

McCann New York also received seven Golds, including three for March for Our Lives “Price On Our Lives” (all in Public Relations), three for MGM Resorts International “Universal Love Songs” (two in Branded Entertainment and one in Radio & Audio) and one for State Street Global Advisors “Fearless Girl” in Creative Effectiveness.

Best of Discipline winners for the first night of The One Show 2019 were:

The One Show special awards
The One Show Green Pencil, recognizing the single most environmentally conscious creative work for the year, was awarded to BETC Paris for “Save Our Species” on behalf of Lacoste.

“Dream Crazy” for Nike by Wieden+Kennedy Portland with Park Pictures Los Angeles and Joint Portland won the Gold One Show Cultural Driver Award, recognizing influential ideas and executions that had a major impact in their respective cultures andenvironments, and exist outside the traditional categories in advertising and design.

The One Show Pencil is one of the highest accolades in the industry because it is one of the most difficult to win.  For this first night of The One Show 2019, there were 85 Gold, 92 Silver and 99 Bronze Pencils awarded for work from 23 countries.  A total of 19,445 pieces were entered this year from 73 countries.

A complete list of all Pencil winners for the first night of The One Show can be viewed below and here.

This year’s winners are announced on two nights of The One Show, May 8 and 10, during The One Club’s Creative Week in New York (www.creativeweek.org)

The second night of The One Show, awarding work in Creative Use of Data, Digital Craft, Direct Marketing, Experiential & Immersive, Film, Integrated, Interactive & Online, Mobile, Print & Outdoor, Social Influencer Marketing, Social Media and special awards such as Best of Show, Agency of the Year, CMO Pencil and Penta Pencil, will take place on Friday, May 10, 2019 at Cipriani Wall Street in New York.

The One Show awards are part The One Club for Creativity’s Creative Week, May 6-10, 2019 in New York (https://www.creativeweek.org).  The preeminent festival showcasing the intersection of advertising, innovation and creative thinking, Creative Week also includes the ADC 98th Annual Awards, two nights of The One Show, the dynamic Young Ones Education Festival, inspiring sessions with some of the biggest names in the industry at the Creative Summit and the exclusive Executive Creative Summit, open to a limited number of top-level leaders (founders, CCOs, managing partners).

The One Club for Creativity, producer of The One Show, ADC Annual Awards and Creative Week, is the world's foremost non-profit organization whose mission is to support and celebrate the success of the global creative community.  The One Show is a top global awards show for advertising, design and digital marketing focusing on creativity of ideas and quality of execution.  The global ADC Annual Awards honors creative excellence in craft, design and innovation across all disciplines.  Creative Week takes place in New York City every May and is the preeminent festival celebrating the intersection of advertising and the arts. 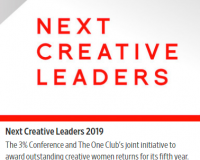 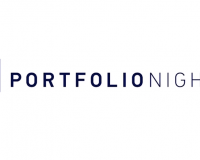 The One Club Partners With OUTFRONT To Honor Excellence In Out-of Home For The One Show 2019
Wednesday, Feb. 20, 2019

In a reflection of the tremendous creative opportunities now possible in today’s outdoor ad market, The One Club for Creativity announced a partnership with OUTFRONT Media, Inc (NYSE: OUT), who will serve as exclusive sponsor for The One Show...