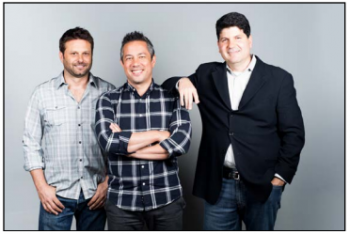 Picture It Productions Partners: Peter Siaggas, Lance Krall, Peter Stathopoulos
Sparks Bidding War with First Network Pitch
ATLANTA
--(SPW)--
In a highly competitive bidding war, Fox has bought the pilot pitch for ONE CALL THAT’S ALL, a legal, scripted family dramedy from Atlanta based Picture It Productions in a co-production with Lionsgate Television, which will be written by Kathryn Price & Nichole Millard. ONE CALL THAT’S ALL is inspired by real-life accident attorney Ken Nugent. The fictionalized story will revolve around his exploits in the courtroom and his highly entertaining family, who all work for him. This includes siblings, children, in-laws, and even ex-wives.
Ken Nugent serves as executive consultant. Lionsgate TV, where Price and Millard are under an overall deal, is the studio.
The project is Picture It Production’s first network pitch. They opened their doors in June 2016 with the goal of providing a resource for television development outside of New York and Los Angeles. Picture It Productions works with regional filmmakers, writers, and producers to bring their ideas to a national audience, using its partners’ industry experience to provide access to the major players. Ken Nugent, a fixture of the southern law community, makes for a natural subject for the company’s first pilot.
Picture It Productions’ Head of Television Lance Krall and Head of Production Peter Siaggas with executive produce with the company’s Peter Stathopoulos. Krall is known for starring in Spike TV’s The Lance Krall Show and has written on Breaking In, Last Man Standing and It’s Always Sunny in Philadelphia. Siaggas is an Emmy-winning director and producer, having worked on The Lance Krall Show, Free Radio and Jimmy Kimmel Live! His commercial production company, Spots Films, is one of the most sought-after commercial production companies in the South.
Lance Krall: “Being based in Atlanta gives Picture It the opportunity to find fresh ideas with unique perspectives. Hollywood executives are always on the lookout for new stories to tell, and there is genuine excitement when they learn that we are bringing them an idea conceived outside of LA and New York. It’s a breath of fresh air."
Price and Millard: “When we met Ken Nugent and his larger-than-life family in Atlanta, Georgia we knew we'd hit TV gold. We love quirky legal shows and big fun family dramedies, and the Nugents’ personal injury firm gives us both in one outrageous package.” The writers, both former attorneys, are under an overall deal with Lionsgate Television. They are known for their work in film and television and their credits include the feature films FALLEN, which premieres this Fall, THE GAME PLAN and creating and showrunning GUILT for Freeform last season.
Price & Millard are represented by Paradigm and Darren Trattner at Jackoway Tyerman.
Picture It Productions is also represented by Paradigm with legal by Jon Moonves and Gordon Bobb at Del Shaw.