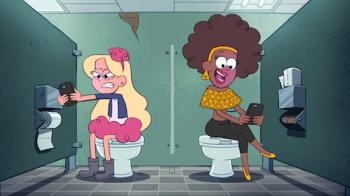 Playing mobile games in the bathroom at the office is probably not a good idea for a lot of reasons, including the chance of an exploding toilet due to resounding defeat at the hands of your opponent. Such is the scenario depicted in a new animated online spot by Calabash for Signal Zero, the San Francisco-based company focused on helping gamers make money playing games, and its new Tap Rival mobile gaming platform.

According to Signal Zero CEO Tobias Batton, Tap Rival is essentially a mobile gaming portal where users can play an array of mobile games, compete with others online and earn points that can redeemed for gift cards and cash. The new animated spot, entitled “Defend Your Throne,” which will be seen on Facebook, YouTube and other gaming hubs, highlights one of Tap Rivals’ key components: the ability for players to compete head-to-head.

“Our audience watches animated shows like ‘Rick & Morty,’ ‘Gravity Falls,’ and ‘Family Guy’ and Calabash has a real gift for capturing that late 80s-early 90s animation style,” Batton says. “But beyond their animation skills, we can see that the ads help convert sales very well. Our marketing is working and Calabash is a big part of that. The ads are funny, they gets people’s attention and have made a difference in our bottom line.”

Marking the second time Calabash has collaborated with Signal Zero, “Defend Your Throne” brings the term “potty humor” to literal heights. The spot opens with close-ups of two females engaged in a heated mobile game battle. Amid gaseous bodily sounds and a whir of bleeps and pings from their mobile phones, their online clash grows in intensity.

Suddenly, the POV pulls back revealing that both women are actually sitting next to each other in adjacent bathroom stalls. The spot crescendos with the losing player screaming as her toilet explodes in a mass of ick, while the winner’s stall literally rains dollars as a heavenly light shines down.

Stylistically, says Calabash Creative Director Wayne Brejcha, they went for a look that emphasized simple figures with cartoony shapes and bold outlines, which, given the fast-pace of the spot, helped give viewers an immediate sense of their personalities, while providing a visual platform for the super outrageous.

“Because there is just the one location, and the camera does not move much, we went with a series of quick cuts from one character to the other and the intensity increases building to the explosive ending,” Brejcha says. “For us the challenge involved capturing the character’s expressions in a strictly 2D world. We also focused a lot on the pacing so you get the reveal that these two women are not just next to each other but also in the bathroom. There was a lot of fine-tuning with nuances of eye squints and the speed of their thumbs tapping like crazy on their phones. For the explosion we had to get the color and texture just right, we were going for over-the-top but wanted to stay in a stylistic range.”

Calabash Executive Producer Sean Henry adds, “One of the reasons the spot works was thanks to the thoughtful and efficient direction from Tobias and Signal Zero Co-Founder/Designer Nathan Christie. “They had the character design to within 90 percent of final for us. We kept laughing at how far they wanted to push the finale. Usually with ads we have to dial everything back, but with this one we dialed forward to the redline.”

About Calabash Animation
Led by Creative Director Wayne Brejcha and Executive Producer Sean Henry, Calabash Animation is the Chicago, IL-based animation production studio known for its award-winning animation for the advertising and entertainment industries. Calabash Animation is perhaps best known for their creative character animation and development of some of America’s most beloved brand icons. In addition to it advertising working, the company has also produced several acclaimed short films, including ‘’Stubble Trouble,’’ which was nominated for an Academy Award® in 2002. 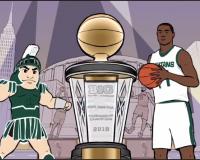 What’s it like to play basketball at the world’s most famous arena, Madison Square Garden? That’s the concept behind a new 6-spot promo campaign for Big 10 Network’s Men’s Basketball Tournament, happening at the famed New York City arena,... 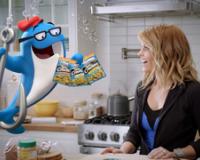 Few toys are as unusual and imaginative as Spin Master’s Kinetic Sand, which entices kids to be hands-on as they turn sand into magical creations that are as fun to squash as they are to create. Equally imaginative is the new :15 ad “...

For toys as unique as the Flutterbye flying fairies, an equally dramatic ad is as important as double AA batteries. That’s why Spinmaster, makers of Flutterbye, reteamed with Calabash... 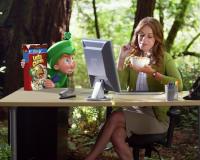 Lucky Charms are definitely not just for kids. That’s a point made in a series of recent spots targeting adults consumers of the beloved cereal – the latest is “Cubicle” (:15), created by agency...