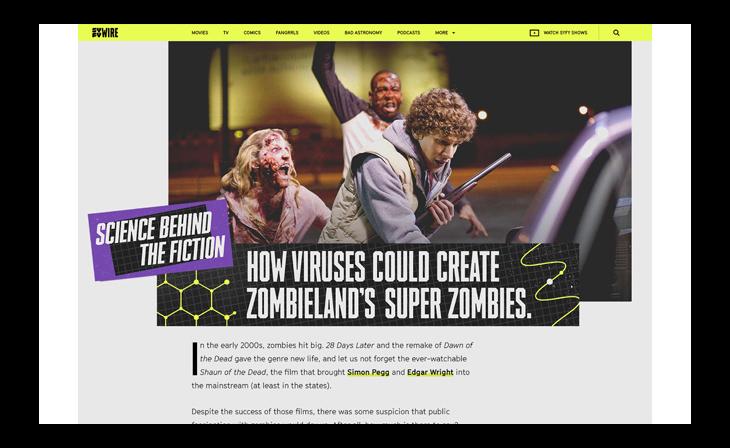 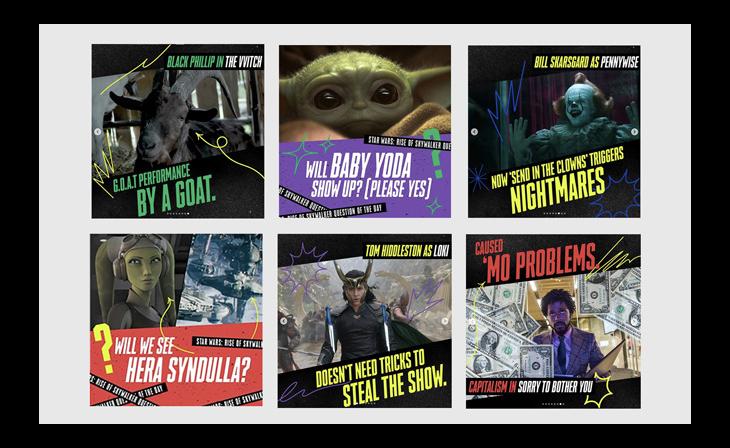 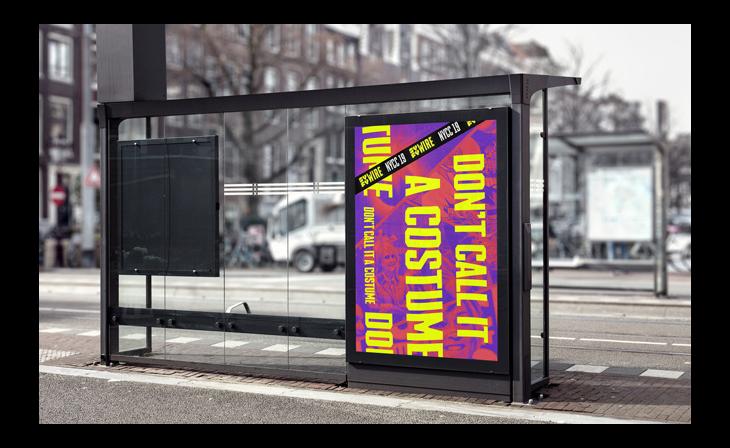 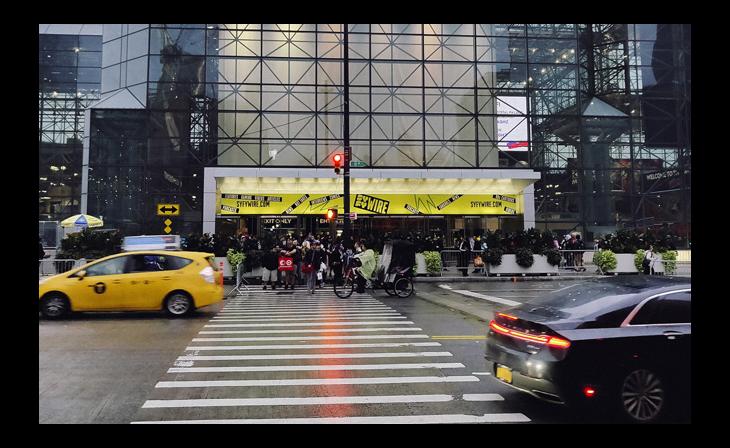 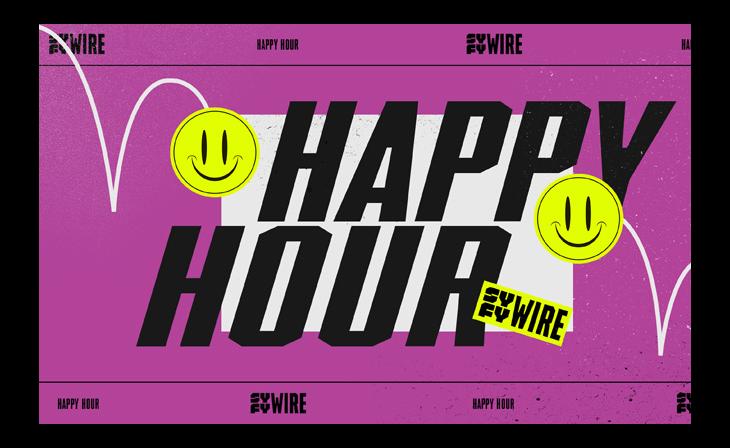 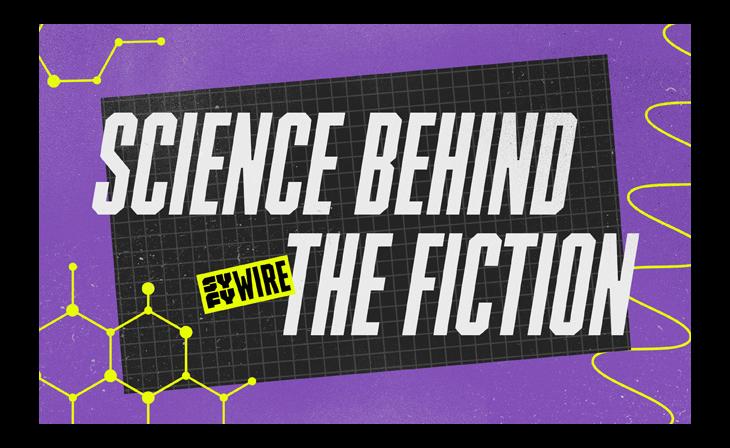 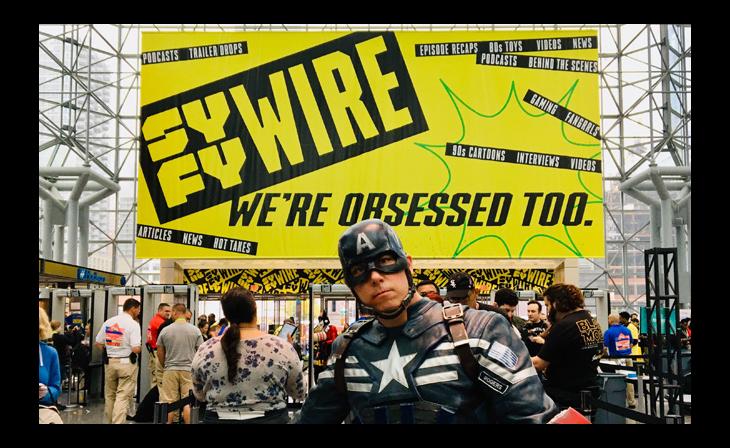 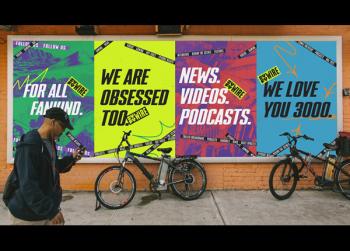 B&T was tasked with reinterpreting the SYFY Master Brand into a distinctive visual identity for SYFY WIRE, using the mantra "We're obsessed too," as a driving force. Drawing on various aspects of sci-fi/horror/fantasy culture, and knowing the importance of genre fandom to the brand, B&T's Partners and Creative Directors Adam Gault and Ted Kotsaftis infused the designs with classic comic aesthetics – and a fan-made feel.

"It was important that the new identity capture the excitement and obsessiveness of geek culture," explained Gault. "Working closely with the team at SYFY, we developed a system that reworked the fonts, graphic devices, and colors from the SYFY master brand into a new, more expressive identity for WIRE."

"While the new brand has a distinct visual voice, the identity is really an ethos - a way of thinking and expressing the passions of genre fandom," said Kotsaftis. "We provided tools for creating graphic content but only loose guidelines for how to use them. Designers approaching the brand have the freedom to express themselves in whatever way they want. It's been amazing to see how the team at SYFY has been implementing and evolving the designs already."

While the rebrand is now appearing on social media, franchise content, advertising, merchandising, and experiential content, its first unveiling was for fans at New York Comic Con (NYCC) in early October.

According to Gault, "The timing of New York Comic Con was perfect. We had already established the major elements of the identity, so designing billboards and decals for the convention center allowed us to put the new ideas to the test. Seeing the brand come to life at 60'x30' was incredible, especially amidst the excitement and passion of the fans attending the event."

Asked about their favorite aspects of the new visual identity, B&T's executives shared several insights. Kotsaftis pointed out the new SYFY WIRE sticker: "The system of playfully placed SYFY WIRE logo stickers we developed was originally inspired by the 'mark of authenticity' stickers placed on collectible comic books," he said.

Regarding the rebrand's look and feel, Gault explained, "Vintage comics provided the inspiration for both the punchy-yet-slightly-desaturated color palettes and the functional comic POWs used throughout the identity.

"Our idea was to foster a ‘fan-made' feel," Gault continued. "We were really inspired by the not-too-perfect, homemade feel of cosplay costumes… there's energy, excitement, and love in those costumes, and we tried to capture all of that in our designs."

B&T's Producer Dorian Carli-Jones also shared his perspective: "The SYFY WIRE rebrand was a team effort with a forward-thinking client who was open to experimentation and out-of-the-box thinking. We thrive when the process is open and collaborative, and the WIRE team was willing to take that journey with us. We're extremely grateful for the opportunity."

Check out SYFY WIRE at https://www.syfy.com.

About BLOCK & TACKLE
BLOCK & TACKLE is a creative studio focused on conceptual design and visual storytelling. Launched in NYC in 2014, B&T has been named among The New York Times' "The Selects" group, honoring the world's top creative talent. Passionate about providing its forward-thinking clientele highly original solutions from concept through delivery, B&T is built to move – with artistry that is earnest, considered, and a little mischievous. Learn more: http://www.blockandtackle.tv. 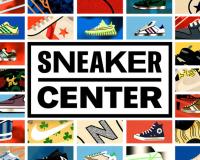