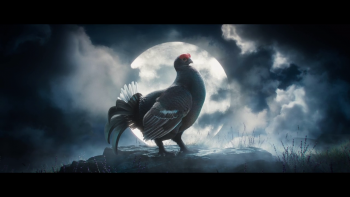 The commercial shows the intrepid Red Grouse enjoying a midnight hike through the iconic Scottish Highlands. The clouds part to reveal a full moon, transforming our hero into the darker, smokier Black Grouse.
LONDON
--(SPW)--

The Leith Agency and Famous Grouse returned to Axis Studios, the award-winning animation and VFX studio, to produce the latest Famous Grouse television commercial, part of a new global campaign to promote the Famous Grouse Smoky Black. It was directed by Local Hero and produced by Calum Hart.

The commercial shows the intrepid Red Grouse enjoying a midnight hike through the iconic Scottish Highlands. The clouds part to reveal a full moon, transforming our hero into the darker, smokier Black Grouse.

Axis Studios worked closely with Local Hero to bring their directorial vision to life. The 20 second TVC, is set in ‘Grouse Country’, generated entirely in CG by Axis. The transformation presented an FX-heavy challenge, working with a dynamic feather and fur system, swirling fog and morphing geometry. The performance was likewise critical; our Grouse had to undergo a playfully scary change without losing his cute charm.

As Local Hero sights, “The main challenge of this film was finding a balance between having a believable transformation sequence, where we see the familiar Red Grouse becoming the bigger, bolder Black Grouse in 20 seconds, while remaining true to the brand personality”.

Richard Scott, Axis Studio’s CEO commented, “We are delighted that The Leith Agency has asked us to produce a fourth Famous Grouse commercial.  It is an iconic Scottish brand and we feel very proud to be playing our part in bringing it to life.”

About Axis Studios
Axis Studios is an award-winning entertainment company, founded in Glasgow in 2000 by CEO Richard Scott, in partnership with Dana Dorian, Stuart Aitken and Graham McKenna. Since its inception, it has grown substantially, tripling its turnover to £15m between 2015 and 2018 and continues to expand. It boasts an international team of directors, designers, artists, animators, writers and producers, working across three studios, Glasgow, Bristol and London. As well as being the largest animation studio in Scotland it also has one of the largest CGI teams in the UK.

Axis started as a gaming animation company, producing many award-winning trailers such as the much-vaunted trailer for Dead Island, which won Baftas, Cannes Lions, The International Andy Award and many more. Its recent awards include: 3 Daytime Emmy's and an Annie award for Lost in Oz S1, AEFA awards (special merit) for Happy, A Bifa award for Earlyman, and an RTS craft award for KMF

Axis Studios is currently working on developing its own IP and creating ground-breaking animation and VFX content for some of the biggest names in video games, television, film, on-line, theme parks and more including, the ‘Helping Hand’ episode of Netflix’s ‘Love, Death and Robots’ and the SyFy series ‘Happy’. 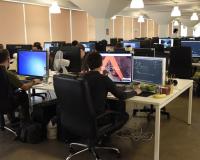 Animation and VFX collective Axis Group has announced the official launch of Axis Studios – a new powerhouse identity that unites Axis' three branches and locations across the UK.