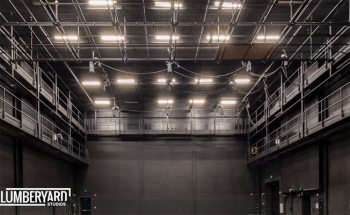 LUMBERYARD Studios is a purpose-built sound stage and offers 12,000 square feet of production space in Hudson Valley, just outside of New York City.
Cast and Crew from HBO’s Upcoming Miniseries, "The Plot Against America," Spend Three Weeks at LUMBERYARD as They Film in Locations Across Greene County and the Catskill Mountains
Catskills, NY
--(SPW)--

LUMBERYARD Center for Film and Performing Arts today announced that HBO signed a contract to rent LUMBERYARD’s newly opened film production facility for a new miniseries, The Plot Against America. The show, adapted from Philip Roth’s acclaimed novel, features a star-studded cast and crew including Winona Ryder, John Turturro, and Zoe Kazan, as well as David Simon and Ed Burns who will serve as writers and executive producers.

The HBO production team arrived on Monday, September 16 and will be headquartered out of LUMBERYARD through October 2. They are shooting in multiple locations in Greene County – New Baltimore and Athens – as well as in the nearby Ulster and Delaware Counties. The crew is staging wardrobe fittings in LUMBERYARD’s dressing room and backstage area, and have set up a set dressing and carpentry shop in the shop and sound stage. Crew members are also taking advantage of LUMBERYARD’s housing facilities on the second floor. In total, on-site personnel will range from twenty to forty cast and crew members for the duration of their stay.

“Working with an established outfit like HBO is an extremely exciting milestone for LUMBERYARD as we look to attract more productions and expand our economic impact here Catskill,” said Adrienne Willis, Executive and Artistic Director of LUMBERYARD. “The Hudson Valley can replicate a diverse range of scenery – from main streets to quaint lakesides and everything in between – all while imparting the benefits of New York’s competitive Film Tax Credit Program. We hope that our role as a Qualified Production Facility can continue to raise Greene County’s stock as a go-to destination for film and TV productions.”

“It’s been a great experience working with LUMBERYARD. Our work in upstate New York is complex, with a challenging schedule; to be able to base our operations at a quality production facility like LUMBERYARD has been tremendous and has made our work easier.” said Joe Guest, Line Producer for The Plot Against America. “We’ve used the facility to support a diversity of production demands, including our set dressing, costumes, scenic and construction departments.”

Located in the heart of Catskill, New York, LUMBERYARD is the only Qualified Production Facility in Greene County. LUMBERYARD features a state-of-the-art, purpose-built sound stage that offers a 12,000 square foot facility for film and production companies. On Wednesday, September 18, LUMBERYARD co-hosted an event with Film Albany that invited local film and production companies to learn more about New York State’s Film Tax Credit Program and tour LUMBERYARD’s sound stage. The event – which was sponsored by Columbia Memorial Health – was attended by more than 50 people representing the local film and TV industry, a testament to Catskill’s increasing relevance as a production destination in the Hudson Valley region. The facility first opened in 2018, and in May, LUMBERYARD rented the sound stage to REMcycle Productions for the production of a full-length feature film, A Deadly Legend.

LUMBERYARD’s primary line of work is as a non-profit center that provides residencies for performing artists to test and perfect their work. LUMBERYARD hosts performances that provides Hudson Valley audiences with an opportunity to see these works before they premiere in New York City. Through the performing arts residencies and rentals of the sound stage and other facilities for filming and private events, LUMBERYARD has cemented itself as an important part of the community’s fabric and a key pillar driving economic activity to the region. This year’s summer season brought thousands of visitors into Catskill, many of whom came from out of state. These patrons – and the cast and crew from production companies that rent LUMBERYARD’s sound stage – shop at local businesses, eat at local restaurants, and stay at local hotels and rented homes.

Following the organization’s mission to work hand in hand with communities and support under-resourced artists, producers, and local residents, 100 percent of the net proceeds from this and all other sound stage rentals are invested back into the local Catskill community through educational and employment programs designed for low-income students, incarcerated teens, and local high school students.

About LUMBERYARD Center for Film and Performing Arts
LUMBERYARD is a non-profit performing arts and film campus located in the heart of Catskill, New York. With a state-of-the-art facility, LUMBERYARD offers a center for performing artists to test and perfect their work, and gives Hudson Valley audiences the opportunity to see performances before they premiere in New York City.

In addition to serving as a residency for performing artists, LUMBERYARD rents its 12,000 square foot space to film and television production companies. 100 percent of the net proceeds from these rentals are invested back into the Catskill community through programs such as: LUMBERYARD Young Performers, which provides free dance education for students living in low-income communities in and around Catskill, Fresh Start, an intervention program for incarcerated teens, and Junior Crew, which provides local high school students summer jobs and workforce development training – from resume building to learning how to network.

Set on the waterfront and just blocks from Main Street, LUMBERYARD is also a venue for weddings and large events, making the space an important part of the community’s fabric and an economic driver for the region.