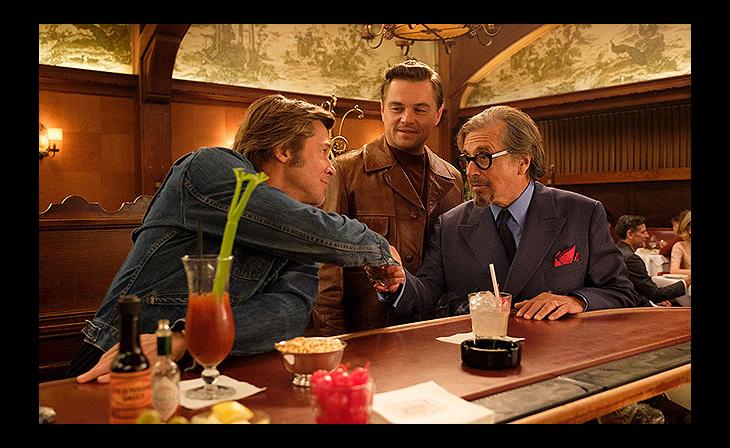 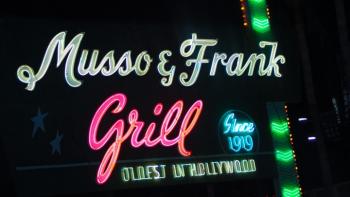 From Buster Keaton to Quentin Tarantino, Musso's Marks 100 Years in Hollywood and Nearly as Long in the Cinema
HOLLYWOOD
--(SPW)--

The iconic and legendary Musso & Frank Grill, located in the heart of Hollywood and currently celebrating its 100th Anniversary, is featured within a key scene in the upcoming Quentin Tarantino film Once Upon a Time…in Hollywood. The film, from Sony Pictures’ Columbia Pictures label, opens in U.S. theaters on July 26th.

The new film marks the most recent appearance of the famous restaurant in the cinema since Musso’s first opened its doors in 1919 on Hollywood Blvd. In 1922, Buster Keaton’s movie Cops became the first in a long series of feature films - and later TV shows - to use the landmark venue as a location by which to film interior scenes, exterior scenes, or both.

“I feel so lucky that there’s a place like the Musso & Frank Grill - one that exists now exactly how it has always been,” said Tarantino. “It was fantastic being able to shoot at an iconic landmark that is so authentic and connected to Hollywood.”

Adds Rick Schuler, Supervising Location Manager for Once Upon a Time…in Hollywood, "Musso & Frank Grill is featured in a big way in the movie. This establishment encapsulates the history of Hollywood. It was a must-have location for Quentin who sought to take us back to 1969 Hollywood - the Hollywood he grew up in and loved. While other establishments have come and gone, it was not so with Musso and Frank Grill. It has stood the test of time. The family who owns it has preserved every detail, so it was a fitting location for a major scene between Brad Pitt, Leo DiCaprio, and Al Pacino’s characters.  If you truly want to see Hollywood, you’ve got to visit Musso and Frank Grill - and who knows who you might just see there.”

Commented Mark Echeverria, CFO/COO/Proprietor of Musso & Frank, as well as a fourth-generation member of the family of owners, “Quentin Tarantino is a truly visionary artist - not to mention just a great guy and a longtime fan of ours - who wanted Musso’s to not merely be a backdrop for his film, but a character in its own right - one that would perfectly embody the essence of Hollywood back in 1969. We have never closed for five straight days in our 100-year history, but we did that last summer so he could shoot inside our restaurant. We made that exception because we love him and because we felt comfortable allowing him to do so – it was a pleasure working with him. We’re grateful to Quentin and his cast and his crew, along with Sony Pictures, for showing such a genuine passion and respect for our restaurant and its 100-year history. We’re deeply proud to be associated with Quentin’s newest film, one surely destined to become as timeless as Musso & Frank itself.”

Musso & Frank: On The Silver Screen
Given its historic Hollywood appeal, Musso & Frank has - not surprisingly - become something of an on-screen celebrity itself since it opened on September 27, 1919, having its interior and/or exterior featured within dozens of entertainment productions. Says Mr. Echeverria, “We are quite proud of the role our restaurant has played as a notable location in numerous films and television shows – so numerous in fact that we’ve lost track of many of them. We’re in such demand that the list is forever growing, and for that we are very grateful.”

Below is a Never-Previously Compiled Timeline of Musso & Frank’s most notable, “guest-starring appearances” on the silver screen:

NOTE: To view the Trailer for Once Upon a Time…in Hollywood, featuring scenes shot at Musso & Frank Grill, please see: https://www.youtube.com/watch?v=ELeMaP8EPAA

About ONCE UPON A TIME…IN HOLLYWOOD
Quentin Tarantino’s Once Upon a Time...in Hollywood visits 1969 Los Angeles, where everything is changing, as TV star Rick Dalton (Leonardo DiCaprio) and his longtime stunt double Cliff Booth (Brad Pitt) make their way around an industry they hardly recognize anymore. The ninth film from the writer-director features a large ensemble cast and multiple storylines in a tribute to the final moments of Hollywood’s golden age.

About THE MUSSO & FRANK GRILL
Founded by Frank Toulet in 1919, with Joseph Musso joining in 1922, and the families of John Mosso and Joseph Carissimi acquiring the venue in 1927, and, more recently, with the family of John Mosso as the sole owners and proprietors since 2009, Musso & Frank Grill has earned an international reputation as one of the world’s leading restaurants, and one offering the world’s most famous martini.

Customers can settle into one of the restaurant’s classic red leather booths, amble over to its famed mahogany bar, gaze around in awe at the classic architecture or peer into what was the city’s very first public phone booth, and you will find yourself transported to another time and place where every meal is a work of art, every patron is a cherished guest, and every moment is an instantly priceless memory.

Offering a combination of old world sophistication and contemporary warmth unavailable anywhere else under one roof, Musso & Frank (and its renowned, even mysterious, Back Room), has been a home away from home over the years for such artistic luminaries as Charlie Chaplin, Frank Sinatra, Clark Gable, Charlton Heston, Marilyn Monroe, Orson Welles, Alfred Hitchcock, Jimmy Stewart, Lauren Bacall, Elizabeth Taylor, Steve McQueen, Jack Nicholson, Johnny Depp, and even The Rolling Stones. The restaurant has also been a source of inspiration for such literary giants as Ernest Hemingway, F. Scott Fitzgerald, Raymond Chandler, T.S. Elliot, John Steinbeck, Dorothy Parker and William Faulkner.

Over the years, Musso & Frank has also become synonymous with entertainment industry power lunches. Indeed, it’s safe to say that the deals made here over the years have mirrored the history of Hollywood itself – all the way from silent films to talkies, from Technicolor to television, from VHS tapes to DVDs, and from cable TV networks to streaming media platforms.

Best of all, while Musso & Frank is obviously steeped in living history, it’s actually more vibrant and retro-hip today than ever, attracting multiple generations of Hollywood denizens who prefer elegance over garishness, career servers over indifferent order-takers, and classic cuisine over passing food fads.

While 2019 is a time for looking back at Musso & Frank, Mr. Echeverria, his family, and his team remain laser focused on the present and future – a key reason why this year is the most successful in the restaurant’s storied history. As he sums it up, “For all of us fortunate enough to be associated with Musso & Frank, 2019 isn’t solely the culmination of our first hundred years – it’s the beginning of our second hundred years!”