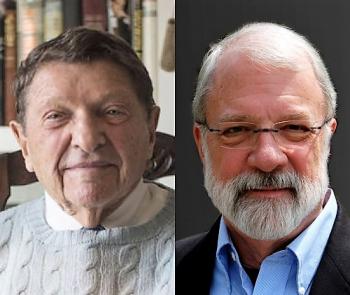 John David Held (l) and Burke Moody (r)– to receive honorary inductions into the AICE Hall of Fame
Past Executive Directors are recognized for their leadership, dedication and vision in service to members and the industry.
NEW YORK
--(SPW)--

In a first for AICE, the two Past Executive Directors of the international post production trade association – John David Held and Burke Moody – will receive honorary inductions into the AICE Hall of Fame at next month’s awards ceremony in New York.

Held, a former ad agency producer, was the association’s first full-time Executive Director, a post he held from 1995 until 2006. Moody, an editor and owner of the post production company Seventh Art in Philadelphia, who was a member of AICE’s New York Chapter board for a decade, was named to succeed him. He served until 2014, when he was succeeded by the association’s current Executive Director, Rachelle Madden.

“As we mature as an organization, we felt it was important to recognize the contributions of our early leaders, the people who helped shape AICE,” says International Board President Craig Duncan of Cutters Studios. “We can’t have a conversation about what AICE has become, and what it does for its members, without acknowledging the contributions of John Held and Burke Moody. They laid the groundwork for our cause and were the first voices for our advocacy, and we wouldn’t be where we are today without them. As our awards show returns to New York, where it first got started – with John’s tireless help, I might add – it’s the proper time to thank them both with honorary induction into our Hall of Fame.”

Held was recruited to the Executive Director post by Editor Bobby Smallheiser, owner of First Edition/Composite in New York. At the time, Held recalls, there were chapters in Los Angeles, Chicago and New York, and they were loosely and not formally allied. “The editors would all meet at the NAB Show and talk,” he says. “They felt they needed an outside person to pull the chapters together and make this a real association.” That was Held’s first major achievement, helping guide the adoption of bylaws and creating a recognized non-profit trade group, originally known as the Association of Independent Commercial Editors.

His next task, he explains, was gaining respect and credibility: “Our objective was to get a seat at the table,” he says. “We had no recognition from clients or agencies at the time, and back then our contracts went through the production companies. We didn’t get paid until they got paid.” Held used his longstanding connections on the agency side to secure meetings with the ANA and the 4As and was successful in getting editorial and post houses paid directly, giving them control over their receivables.

Held cites other accomplishments that he’s proud of, such as working with board members to launch the AICE Awards in 2001, extending the membership to Toronto (and making the association international in scope) and enlisting the contributions of New York chapter members to provide editorial and creative services in support of the city’s bid for the 2012 Summer Olympics.

He also points out that the association was careful to ensure no single chapter could overshadow others by requiring that the position of International Board President, which serves a two-year term, not be filled by someone from the same chapter twice in a row. Similarly, the AICE Awards presentation – the association’s signature annual event – was also designated to rotate its venues between the three biggest chapters: New York, Chicago and Los Angeles.

Optimus’ Tom Duff, the Chicago Chapter President who’s been active in AICE since its formative days and served two terms as International Board President, recalls Held’s passion for the job and for the post production community. “Being a former agency producer, we weren’t sure how he would embrace us, but he did wholeheartedly,” Duff says. “Like Burke after him, he cared so much. He lived and died for us.”

Held’s contributions, particularly at the time he made them, are hard to measure: “The association was kind of rudderless before John arrived, and through his leadership and counsel he put us on the map,” Duff points out. “John helped lay the foundation for a lot of things our members take for granted today, and had a hand in many critical business practice issues. For those who questioned what AICE could do for them, he laid it all out. And that’s still paying dividends for our members.”

AICE’s challenges were no less imposing when the baton was handed from Held to Moody in 2006. One of the biggest was to shift the mindset of AICE towards thinking across regions, moving it away from its historically chapter-driven focus. “It was my belief, shared by many on the board, that we needed to have a strong national presence to achieve our goals,” Moody says. “That entailed transitioning us from an association of chapters to an association of companies. And that was a big change in how we perceived ourselves.”

Among the other accomplishments during Moody’s tenure was the expansion of membership to include audio, color grading, design and visual effects companies in addition to editorial shops. The organization’s outreach to other industry groups was similarly expanded, as well as its education programs and ongoing series of seminars, roundtables and meetings at all AICE chapters.

AICE also expanded and refined its annual awards competition during this time, underwent a major revision of its bid form, launched its web site and branded its trailer-editing competitions for assistant editors, designers and audio engineers across all chapters as Camp Kuleshov, a move which has greatly increased its visibility and exposure.

He responded by preparing a series of white papers and recommended practices that still serve as benchmarks for association members. He also launched the association’s Technical Committee, which has expanded beyond its original brief of educating and informing members to doing much the same for the industry at large. It’s currently taken a lead role in helping establish a new set of digital video deliverable standards in concert with the ANA, the 4As and other industry trade groups.

Clayton Hemmert of Crew Cuts in New York worked with Moody when both were on the New York Chapter board and was a member of the International Board (and for two years its President) when Moody was named Executive Director. “One of the most interesting things about Burke is that he’s a true Renaissance man, and always has been,” Hemmert says. “He’s a great creative editor and an entrepreneur, and was a technologist before anyone was.”

Hemmert cites Moody’s work in creating white papers and policy statements that cast the contributions of the post production industry in a new light for advertisers and agencies. “The documents we shared with them showed we weren’t just a bunch of editors squawking,” he says. “He was able to take the pulse of the industry, particularly on the area of transparency. He articulated our push for fairness and ethics early on. We’re at a critical stage now of a very long road, but we wouldn’t be where we are today on this issue without Burke. We owe him a debt of gratitude.”

‘Honored and Grateful’
Held says he was honored when he learned AICE was inducting him and Moody into the Hall of Fame, and added that he hopes this serves as a complementary salute to those who worked with him in the association’s early days. “There are a handful of people not widely recognized who, if they had not put in the time and effort that they did, the association would not have gotten to where it is today,” he says. He cites individuals such as Arthur Williams, Bernadette Quinn, Mitch Garelick, Bob Friedrich, Tom Duff, Steve McCoy and the late John Palestrini as examples. “The work they did was instrumental in making the association succeed.”

Moody’s reaction was similar. “Until now, there’s been no precedent for inducting anyone into the Hall of Fame that wasn’t an editor or artist,” he notes. “To have something like this established for John and me is both wonderful and remarkable. I’m honored and grateful to be so recognized.

“To be able to serve as Executive Director of an association of which I was a member, and to have an opportunity to help influence its direction, working with the boards, the company owners and the members, was a thrill and an honor,” Moody continues. “To be given the trust of the membership was an honor as well. It’s even more satisfying in that it was in an industry that I love.”

The AICE Awards will be presented on Thursday, May 11 at Capitale on The Bowery on New York’s Lower East Side. For tickets, please visit https://www.aiceawards.org/tickets/index_2017.php.

About AICE
AICE is the marketing communications post production association whose members are independent creative editorial, design, visual effects, color grading, audio, music and finishing companies. It is dedicated to the advancement and promotion of these companies and the essential role their artists and producers play in the media creation process. With chapters in Atlanta, Chicago, Detroit, Los Angeles, Minneapolis, New York, San Francisco, Texas and Toronto, AICE maintains a strong collective voice in the commercial advertising and marketing industry. Among its signature initiatives and programs are the annual AICE Awards, which highlights creative excellence among its member companies; the regular publication of recommended practices, white papers and advisories on relevant trends and developments in post production; and active participation with other industry organizations on the establishment of standards and best practices for the post production process.  For more information, visit www.aice.org.

AICP has announced the Call for Entries for the AICP Post Awards, its revamped and rebranded competition for excellence in the post production arts. Formerly the AICE Awards, its categories have been re-imagined with a focus on recognizing... 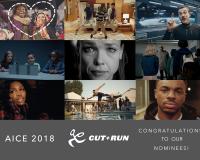 Cut+Run is honored to be shortlisted for 10 AICE awards. The 2018 AICE Awards accepted entries in 18 categories, which honor the excellence and skill of the editor, and nine craft categories. The winners will... 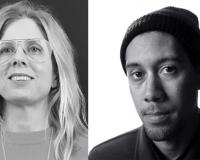 AICP has announced the roster of editors and post production artists who’ll serve on the Curatorial Committee for the 2018 AICE Awards, which honors excellence in... 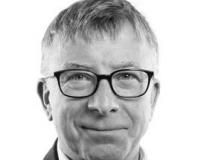 Matt Miller, President and CEO of AICP, and Robin Shenfield, CEO and Co-Founder, of The Mill and the 2018 Chairperson of the AICP Show: The Art & Technique of the American Commercial, announced the composition of the Show’s...