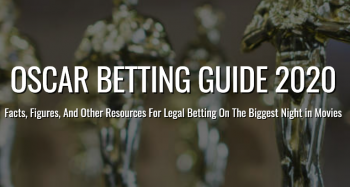 After becoming first legal jurisdiction in U.S. to offer Oscars betting in 2019, Indiana Gaming Commission opens door for sportsbooks to bank on Oscars interest, according to PlayUSA.com
ATLANTIC CITY
--(SPW)--

Sportsbooks in Indiana have joined New Jersey as the only states offering movie buffs the opportunity to join their favorite actors, actresses, and directors as big winners from the 92nd Academy Awards. A year after New Jersey’s retail and online sportsbooks broke new ground in the United States by offering legal betting on the Academy Awards for the first time, both Indiana and New

To prepare for the movie industry’s star-studded night, PlayUSA has created a complete rundown of the Oscars at www.playusa.com/sports-betting/oscars, including odds on every major category, a pick sheet, what sites are accepting bets, and analysis on the races.

“Oscars betting was a hit in its first year in New Jersey, and we suspect that interest will only grow,” said Jessica Welman, betting analyst for PlayUSA.com and a movie historian who earned a degree in Cinema-TV Critical Studies from the University of Southern California, and a master’s in Film and Media Studies from Indiana University Bloomington. “We saw last year that bettors were less motivated by the favorites and more interested in backing their favorite films and movie stars. This year's field of nominees has star power in front of and behind the camera, so that should help drive interest.”

New Jersey sportsbooks accepted an estimated $1 million in bets in the first year that it was offered, according to PlayUSA. Now that the Indiana Gaming Commission has authorized betting on the Oscars at the state’s sportsbooks, which happened on Wednesday, Hoosier State bettors will have the same chance.

The Indiana operations of FanDuel and DraftKings are expected to be the first in Indiana to offer odds in the state, but more will likely follow.

“It is exciting that Indiana has opened the doors to Oscars betting,” Welman said. “The Academy Awards will likely only generate a fraction of the bets of the NFL’s big game, but the interest should still be significant. For Indiana bettors, it will make a fun and new way to enjoy the Oscars.”

DraftKings became the first sportsbook to post the Oscars, followed by FOX Bet, and more are expected soon. DraftKings is offering odds on all 24 categories at the Academy Awards. In 2019, most books limited action to the six major Oscars categories, including best picture, director, actor, actress, supporting actor, and supporting actress.

“The top categories will undoubtedly draw the most interest,” Welman said. “This year, in particular, is shaping up to be a controversial one. Again, critics can point to a lack of diversity in nominations and some films, such as Joker, have received polarized audience reactions. But instead of fighting with friends about a movie's merits, New Jersey movie buffs can quietly put their money where their mouth is.”

The four major acting categories all feature prohibitive favorites. Joaquin Phoenix (-1,667), for Joker, and Renee Zellweger (-1,000), for Judy, are the clear frontrunners for Best Actor and Best Actress, respectively. Brad Pitt (-1,000), for Once Upon a Time in Hollywood, and Laura Dern (-1,000), for Marriage Story, are the favorites for Best Supporting Actor and Best Supporting Actress, respectively. Sam Mendes (-134), for 1917, and Bong Joon Hoo (+225), for Parasite, are leading a tight race for Best Director.

“Best Picture seems like a two-horse race between the two Golden Globe picture winners, 1917 and Once Upon a Time in Hollywood,” Welman said. “While no one is arguing that Once Upon a Time in Hollywood is Quentin Tarantino's best film, the Academy is typically concerned with ensuring deserving nominees get rewarded. This could be the Academy’s last chance to give Tarantino the top prize, and that often carries a lot of weight.”

About the PlayUSA.com Network
The PlayUSA.com Network is a leading source for news, analysis, and research related to the market for regulated online gaming in the United States. With a presence in over a dozen states, PlayUSA.com and its state-focused branches (including PlayNJ.com and PlayPennsylvania.com) produce daily original reporting, publish in-depth research, and offer player advocacy tools related to the advancement of safe, licensed, and legal online gaming options for consumers. Based in Las Vegas, the PlayUSA Network is independently owned and operated, with no affiliations to any casino — commercial, tribal, online, or otherwise.