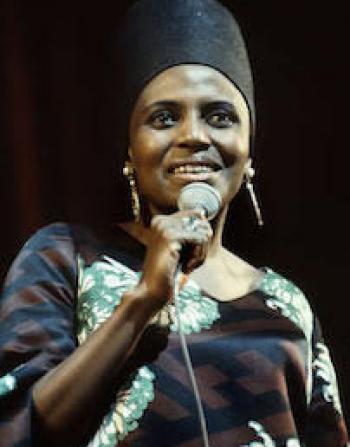 Zenzile Miriam Makeba (4 March 1932 – 9 November 2008), nicknamed Mama Africa, was a South African singer and civil rights activist. In the 1960s, she was the first artist from Africa to popularize African music around the world. She is best known for the song "Pata Pata", first recorded in 1957 and released in the U.S. in 1967. She recorded and toured with many popular artists, such as Harry Belafonte, Paul Simon, and her former husband Hugh Masekela. Makeba campaigned against the South African system of apartheid. The South African government responded by revoking her passport in 1960 and her citizenship and right of return in 1963. As the apartheid system crumbled she returned home for the first time in 1990. Makeba died of a heart attack on 9 November 2008 after performing in a concert in Italy organised to support writer Roberto Saviano in his stand against the Camorra, a mafia-like organisation local to the region of Campania. (source: Wikipedia)
LOS ANGELES
--(SPW)--

The life story of Miriam Makeba, who was among the most important voices in South Africas transformation from the oppression of apartheid to the democratic presidency of Nelson Mandela, is being brought to the screen by a team of film, television, music and Broadway producers, who are working in collaboration with the Miriam Makeba Estate, Miriam Makeba Foundation and Mama Africa Cultural & Social Trust.

Willette Klausner, is also producer of the long running audience favorite Three Mo Tenors and of two critically acclaimed Broadway plays, The Encounter " currently on Broadway with Simon McBurney, and Eclipsed, which starred Oscar® winner Lupita Nyong'o and was written by The Walking Deads, Danai Gurira.

David Franco is a former A&R executive of Warner-Elektra-Atlantic Records International Division. He has worked on over 150 Film/TV projects, including the Oscar and Golden Globes nominated film Into The Wild directed by Sean Penn, featuring songs by Pearl Jam's Eddie Vedder.

Marc Le Chat first met Miriam Makeba after attending and covering her performance with Paul Simon on his Graceland concert in Zimbabwe in the late 80s. With apartheid still in effect, the show could not perform in South Africa. After her return to the country in 1990, he became her publicist and confidant for the next 15 years. Makeba died in 2008 at the age of 76.