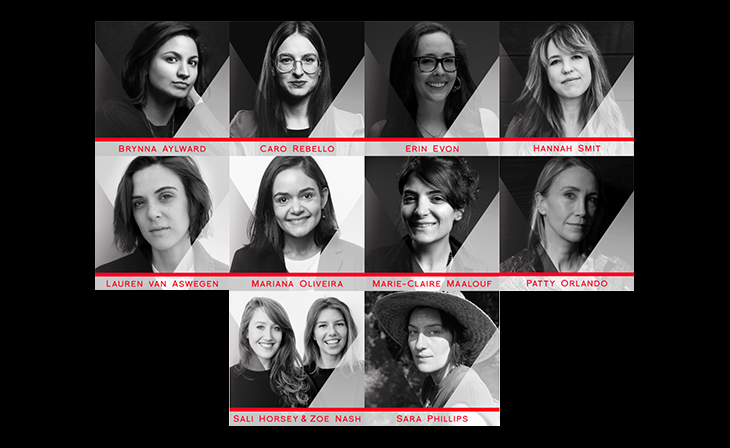 The 2019 Next Creative Leaders 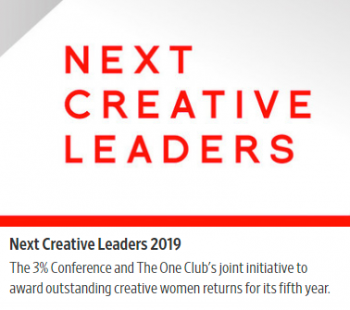 The One Club for Creativity, the world's foremost non-profit organization recognizing creative excellence in advertising and design, and The 3% Movement, the advertising industry’s leading voice for gender equality and diversity overall, today announced the winners of their joint Next Creative Leaders global awards program for 2019 at the eighth annual 3% Conference in Chicago.

Developed collaboratively by the organizations in 2015, Next Creative Leaders identifies and celebrates talented creative women who are making their mark with both great work and a workplace perspective on diversity that helps change the industry for the better.  While seven of this year’s honorees currently work in the US, the program has a strong global element with eight winners originally from other countries.

Next Creative Leaders for 2019 are:

“The One Club for Creativity has a long-standing commitment to providing programming that helps improve the industry's diversity and gender equality,” said Kevin Swanepoel, CEO, The One Club.  “We created our own Inclusion & Diversity Department nearly a decade ago, and are proud to support programs like Next Creative Leaders that identify, elevate and give voice to those who are making a real difference.  They are the ones who are opening the door and inspiring the next generation of women who follow in their footsteps.”

“I’m proud of the level of talent and spirit embodied by this year’s Next Creative Leaders and their contribution to the industry,” Kat Gordon, founder, The 3% Movement.  “The majority of our winners are currently or originally from outside the US, making this a true global showcase of diversity, advocacy and opportunity for people of every ethnicity.”

To make the Next Creative Leaders program as open and accessible as possible, there is no cost for entering the competition.  Entrants were judged on four-to-six pieces of creative work, their background, and information about how they — and their work — are pushing the industry forward and making a positive contribution in terms of diversity, mentoring and advocacy.  Winners were selected by a jury of 39 top creatives, including a number of past Next Creative Leaders winners.

About The 3% Movement
Started as a passion project to spotlight a huge business opportunity in advertising -- the lack of female creative leadership and its impact on connecting with an overwhelmingly female marketplace -- the 3% Movement has grown exponentially since its 2012 launch and has hosted 26 events in cities globally. Now moving beyond awareness to activation, the 3% team offers consulting services with agencies and brands to support more diverse leadership and a 3% Certified program that awards those demonstrating true leadership around gender diversity.

The One Club for Creativity, producer of The One Show, ADC Annual Awards and Creative Week, is the world's foremost non-profit organization whose mission is to support and celebrate the success of the global creative community.  The One Show is a top global awards show for advertising, design and digital marketing focusing on creativity of ideas and quality of execution.  The global ADC Annual Awards honors creative excellence in craft, design and innovation across all disciplines.  Creative Week takes place in New York City every May and is the preeminent festival celebrating the intersection of advertising and the arts. 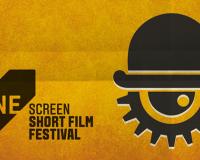 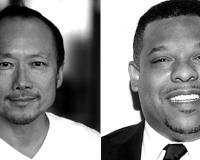 Brandon Rochon, managing CCO at Kastner & Partners, and Robert Wong, VP, Google and co-founder of Google Creative Lab, are recipients of this year’s prestigious One Club | ADCOLOR Creative Awards.  The honors were presented last night at the ...

The One Club Partners With Five Agencies To Establish The One Club-Carolinas Chapter
Thursday, Jun. 6, 2019

The One Club for Creativity, the world’s foremost nonprofit organization that promotes excellence in advertising with the goal of nurturing a more vibrant and inspired global creative community, has announced a partnership with McKinney, The... 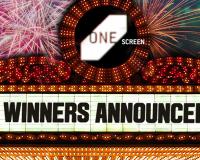 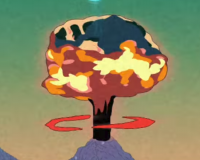 After enlisting a half-dozen top animation studios from around the world to each create a separate segment for the campaign to promote the call for entries for the ADC 98th Annual Awards, The One Club for Creativity today released the complete “...