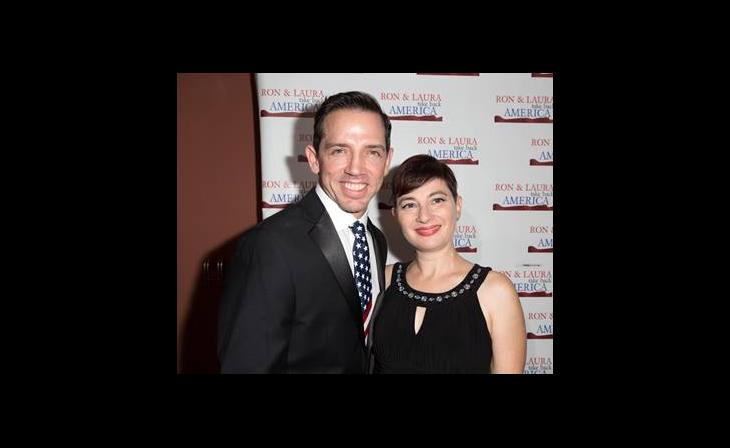 Mel England and Janice Markham at the Hollywood Premire of “Ron and Laura Take Back America” at the Sundance Sunset Cinema, March 9, 2016. (photo by Sheri Determan) 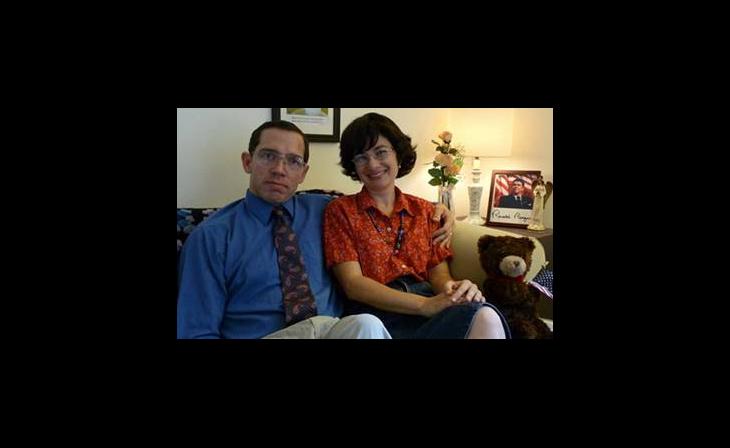 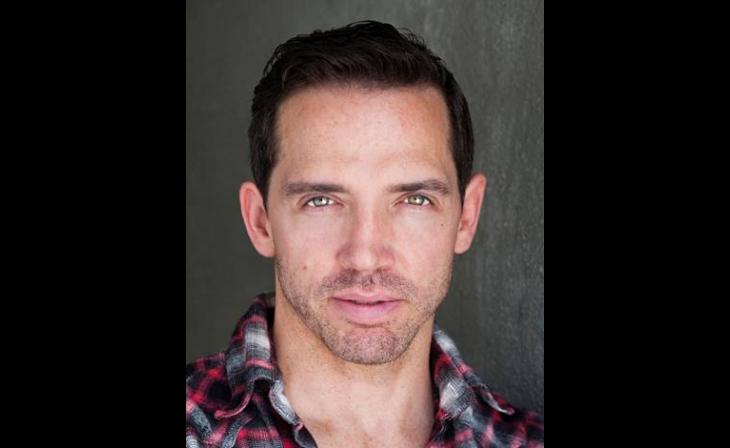 Mel England, "Best Actor" nominee at NYCIFF and “Best Actor” nominee at IIFC, stars as the grumpy conservative having a bad day, “Ron.” 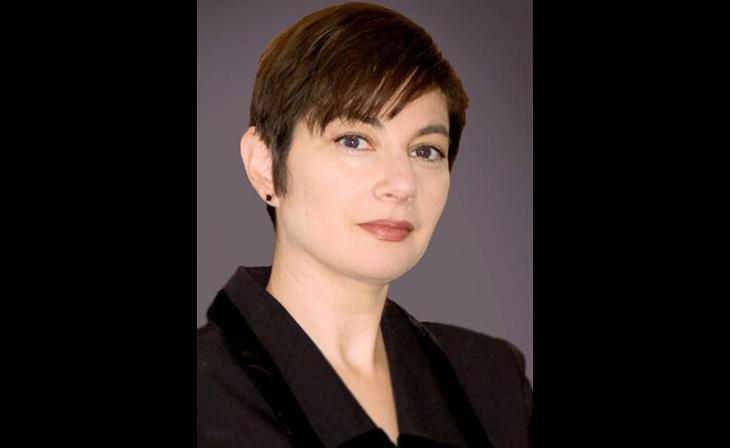 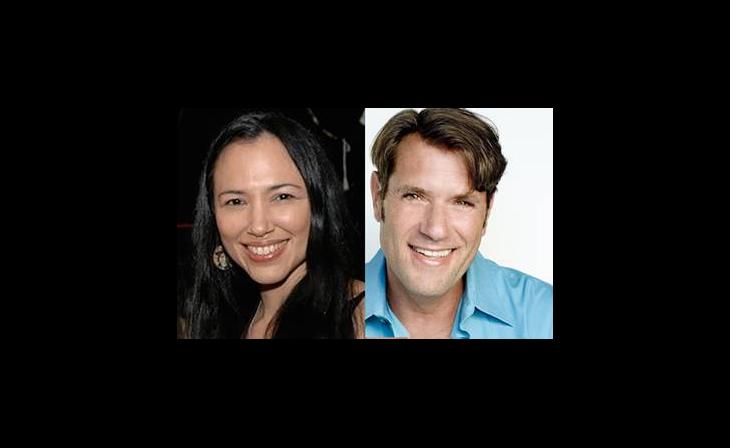 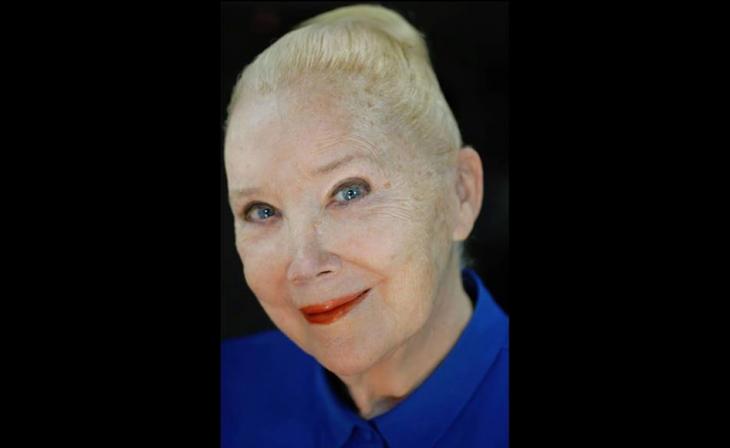 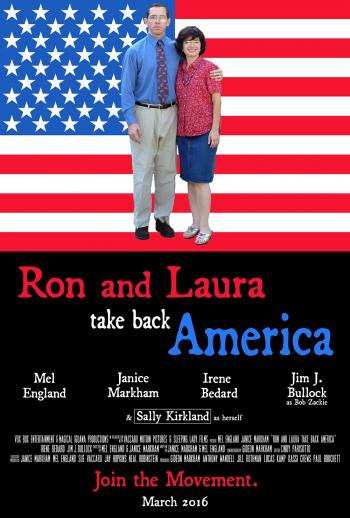 “RON AND LAURA TAKE BACK AMERICA” is a joint production of Vox Box Entertainment and Magical Iguana Productions, in association with Vaccaro Motion Pictures and Sleeping Lady Films, and has garnered a total of 16 awards and nominations from the festival circuit, including wins for “Best Comedy,” “Best of Festival," “Best Director” and “Best Actress” and nominations for “Best Actor” and “Best Screenplay.”
HOLLYWOOD
--(SPW)--

RON AND LAURA TAKE BACK AMERICA, a new political mockumentary satire that tackles many of the issues enveloping the current election season opens in Los Angeles on Friday, March 18th and runs through the 24th at the MGN Five Star Cinema, 128 N. Maryland Ave. Glendale, 91026.  Then it opens in New York at the Cinema Village (22 East 12th Street, NYC) March 25-31, 2016.  The movie premiered March 9th to a packed house of the film’s stars and celebrities in Los Angeles at the Sundance Sunset Cinema.

In the style of Waiting for Guffman and Best in Show, Ron and Laura Take Back America follows the exploits of a hapless conservative suburban couple who decide to take their country back from the dangers of Obamacare, immigration reform, and gay marriage… issues that have fueled the fires of recent political debates across the nation. But when the “culture wars” land right in their own backyard – a gay son; an undocumented immigrant housekeeper; a Muslim-American doctor – Ron and Laura have to double down on their convictions if they’re going to save their son and the country that they love. Just in time for election season, Ron and Laura Take Back America is an irreverent and hilarious take on the sticky issues that unite and divide us.

The film is having its theatrical release in the midst of a boisterous and heated Presidential primary on both sides of the aisle.  “Ron and Laura are trying to take their country back from everything.  It’s funny, when we were shooting the film we couldn’t have predicted how far things would go.” said England.  Janice Markham added, “Right, with the absurdity of this election year, I really think the timing is perfect!"  The project marks a first-time collaboration of Markham and England’s respective production companies, Vox Box Entertainment and Magical Iguana Productions.

Bedard, most known as the voice and likeness of Disney’s Pocahontas and more recently on TV’s Longmire, not only co-stars in the film, but also co-produces and the project marks the first release of her new production company. Bedard states, "Sleeping Lady Films is pleased that “Ron and Laura Take Back America” is our debut feature.   The subjects tackled by this film are both timely and important.  As a production company which focuses largely on Indigenous stories, we have expanded our scope with this creative and satiric social commentary."

For Kirkland, the movie is a fitting return to both her roots in not only the early days of independent films (famously nominated for the Oscar and winning a Golden Globe and Independent Spirit Award for the indie hit “Anna”), but moreover as a well-known Hollywood political activist and liberal.   “The film is basically for optimum equality -- by brilliantly making fun of inequality!"  said Kirkland.

On stage, England has performed Off Broadway, regionally and internationally. England's solo show "Swimming with the Polar Bears" premiered Off Broadway, and as part of a benefit for The Climate Project featured posters of the show signed by Vice President Al Gore. It then toured worldwide, to LA, Washington DC's National Mall for the 40th Anniversary of Earth Day, and the UN Climate Change Summit in Copenhagen. England's solo show "Navajo Memoirs" was dubbed "Ingenious" by Backstage. Other Off Broadway credits include "Hecuba," "Marriage," and "Imaginary Invalid." England starred in the NY and LA premieres of Israel Horovitz’s "3 Weeks After Paradise." Other notable productions include "Lucky Man" (Best Acting Ensemble, NY Fringe) and "A Shayna Maidel" (Best Play of the Year, Denver). He was a proud part of the original NY productions of Chris Sanderson's "Midsummer Night's Dream," "Sea Monkeys" by Tony Nominee Chad Beguelin, "The Honeysuckles" (developed for TV by FOX), and "King of Connecticut" with Phillip Seymour Hoffman.

JANICE MARKHAM (“Laura,” co-writer/co-director) is a writer, actor, musician, activist and Artistic Director of Vox Box Arts Collective and co-founder of the sister company, Vox Box Entertainment, along with her husband, Gideon Markham. Janice is honored to have won a slew of awards for VBE’s debut co-production, “Ron and Laura Take Back America” along with co- star/writer/director/producer, Mel England and Gideon as cinematographer.

Janice plays violin in the Jewish Cultural Revival band and theater ensemble, Mostly Kosher. With a live radio show format, Janice has channeled her Jewish Grandma with her “Mamela” character to great acclaim. Performance venues: Skirball Cultural Center, John Anson Ford Theater and Dorothy Chandler Pavilion. Mostly Kosher won a World Music Network award for “I Love You Much Too Much”, and the music video was nominated for two awards at the Idyllwild International Festival of Cinema. Janice plays music and creates live sound design for “The Black Version”, the award-winning sketch comedy show in its sixth year. Original cast members include Keegan Michael Key and Jordan Peele with guest artists Maya Rudolph, Wayne Brady and Niecy Nash. Janice is also a freelance writer for Disney Publishing and Cartoon Network.

“RON AND LAURA TAKE BACK AMERICA” is a joint production of Vox Box Entertainment and Magical Iguana Productions, in association with Vaccaro Motion Pictures and Sleeping Lady Films, and has garnered a total of 16 awards and nominations from the festival circuit, including wins for “Best Comedy,” “Best of Festival," “Best Director” and “Best Actress” and nominations for “Best Actor” and “Best Screenplay.”

RON AND LAURA TAKE BACK AMERICA 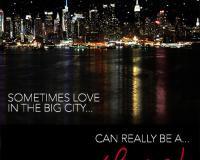 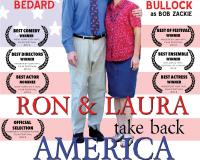 “Ron And Laura Take Back America” To Screen At Hoboken International Film Festival
Friday, May. 15, 2015

The executive producers of “Ron and Laura Take Back America” announce today that their film will screen at the 10th Annual Hoboken International Film Festival.  The multiple award-winning film will play May 30, 2015 at 6 p.m. at the historic... 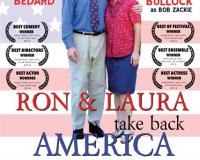 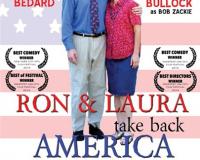 “Ron And Laura Take Back America” To Be Opening Film of 2015 Idyllwild International Festival of Cinema
Monday, Dec. 22, 2014

The executive producers of “Ron and Laura Take Back America” announce today that their film will have the honor of being the opening film at the Idyllwild International Festival of Cinema.  The award-winning feature will play January 6, 2015 at 8... 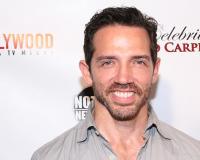 Indie film actor Mel England is blazing a trail across the film festival circuit and winning many awards along the way. Two films that he stars in took home five awards at the conclusion of Indie Fest USA International Film Festival in October...