SHOOT BTS Photo Contest Entry: On the Set of “Sprint: Cut the Nonsense” Set to look like a classic Hollywood photo. On a closer look, one can see the phantom cameras and casual wardrobe. Photo by Matt K at The Lot Stage 7. Enter your BTS image today! Details & Entry Form: http://BTS.SHOOTonline.com 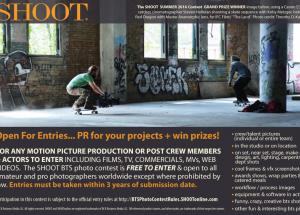 The Editors of SHOOT announce a new social dimension to SHOOT's Behind The Scenes Photo Contest (BTS) that makes it incredibly simple to enter your BTS Photo(s).  Effective immediately, BTS photo entries can be submitted, for free, using your own valid Facebook, Instagram or Twitter account. Using the hashtag #MySHOOTbts in your public BTS image post(s)* caption will automatically enter your photo into SHOOT's BTS contest! (include short description of photo, names of people (if any) in photo (i.e L to R), and required photo credit info, #MySHOOTbts to enable SHOOT Editors to identify the relevant entries) All tagged photos and tweets may appear on the SHOOT's Profile Pages on Facebook, Instagram and Twitter. Entry is FREE. Participation in this contest via your own valid Facebook, Instagram or Twitter account are in agreement and subject to the official rules at http://btsPhotoContestRules.SHOOTonline.com Entries for the 2016 Summer Contest are being accepted now thru September 13, 2016. Voting ends on September 13th Midnight ET. For a detailed overview, entry form, entries gallery, and to vote see below or visit: http://bts.SHOOTonline.com

Gerald Giannone, co-owner of SHOOT and managing editor of The SHOOT Publicity Wire commented, “This is truely an idea whose time has come and we are excited to be providing this fun, simple, easy to use forum for the motion picture industry (our readers, followers, supporters, and members) to showcase their moving image projects, talented people, tools, and the creative genius required to produce the magic of taking an idea and bringing it to life on screen - big or small -  for the world to view. After only a couple of weeks we've recieved almost 100 entries from all over the World, opened an Instagram account for the contest at #myshootbts that is getting likes and followers from user groups #broadcastproducer #behindthescenes #bts #cameramayhem #cinematographer #cinematography #commercialproduction #director #directorofphotography #dop #film #filmlighting #filmmakers #filmcrew #filmeditors #filmmaker #filmmaking #filmproduction #filmschool #filmset #makeupartist #moviemakers #moviemaking #producer #production #productiondesigner #setdesign #setlighting #vfx #photocontest"

"Vote to win," “like to win” or “comment to win”
The editors of SHOOT will select winner(s) and honorable mentions from photos with the most votes (maximum number of total votes per image is 1000). 1 person voting for 100 days, or 100 people voting in 1 day equal the same results.  Voting is a simple click vote once per day. Anyone can vote on an image for free and keep revisiting each day to do so. Along with the Votes made at http://BTS.SHOOTonline.com and via SHOOT's’ Facebook App Page, Likes and retweets counts will be added in as well from Facebook, Instagram or Twitter. And, comments on your Facebook, Instagram or Twitter will also be reviewed.

How To Enter
There are four easy ways to enter:

Who Should Enter
The SHOOT BTS Photo Contest is for any motion picture production or post crew members & actors to enter BTS photos from Films, TV, Commercials, MVs, and Web videos.  The Contest is a perfect showcase opportunity for those who are creating, shaping and defining the world of the motion pictures production and post. The Contest is open to all amateur and professional photographers in the United States, Canada, and worldwide except where prohibited by law including actors, producers, writers, directors, cinematographers, editors, vfx artists, music & sound designers, production designers, art directors, costume designers, make-up artists, special effects gaffers & grips, carpenters, vfx animators, music & sound mixers, set unit still photographers, ADs, PAs, publicists, legal advisers, location managers, and others involved BTS in the filmmaking process. Participation in this contest is subject to the official rules at http://btsPhotoContestRules.SHOOTonline.com

The winning image will be published on a SHOOT magazine cover and the winning photographer will receive a minimum of $500. USD. Runner-up photo and honorable mentions will also receive prizes. (Note: If sponsors are secured, SHOOT will award larger material or cash prizes.)

The SHOOT BTS Photo Contest is a fun opportunity for our readers and followers to participate in documenting and showcasing who they are and what they do every day. The types of photographs we're interested in seeing are listed below and should be interesting, fun, surprising and creative:

The contest is FREE to enter and photographers of all abilities are invited to submit photos below or at http://BTS.SHOOTonline.com or on SHOOT's Facebook page here (FB best for uploading via mobile device (i.e. iPhone or iPad). There is no limit to the number of photo submissions per entrant. Entries must be in digital format and submitted electronically in accordance with the contest guidelines and rules.  Images must have been taken no longer ago than 2 years prior to the entry's submission date. All entrants must be 18 years old or older. People may vote for multiple entries; however only one vote per person will be allowed per entry, per day during the voting period.

All contest photos will be displayed at http://BTS.SHOOTonline.com in a gallery and on SHOOT's Facebook page here.  Submissions must identify the location of the photo.

About The SHOOT Behind The Scenes (BTS) Photo Contest
Fascinating, ingenious, creative people read and follow SHOOT everyday. And, the Editors of SHOOT want to showcase their expertise in a fun simple way. We invite filmmaking crews, from around the world, to give us a glimpse into your shoot, whereever it may be, of you, your associates and colleagues in action be it in movies, TV, music videos, commercials, or web videos. An insider’s perspective into you, your shoot, your team or your company.  Whether on location or in the studio we want to see our readers doing what they do best... producing and finishing motion pictures!

Behind every type of motion picture (movie, TV, commercial, MV, web video) is a production and post team planning and coordinating every detail. From location selection to casting, wardrobe, hair and makeup to storyboards and production design, filming to animation/VFX, editing and music and sound, fitting everything together visually to tell a story.  SHOOT has long held a deep commitment to showcasing these behind the scenes filmmakers and artisans in the field of motion picture production and post for filmmaking, TV, Commercialmaking, and online video. SHOOT “Behind The Scenes” (BTS) Photo Contest deepens this long-held commitment to reporting on the motion picture production and postproduction visual artists, companies, and tools, who create and tell visual stories.

This bi-annual photo contest — held during the summer and winter - is designed to encourage and promote the image of visual storytellers by showcasing their work-in-process, skills, creativity, tools in the art of motion pictures production and post one picture at a time. The SHOOT BTS Photo Contest is a perfect opportunity for the professionals who are creating, shaping and defining the world of the motion pictures production and post to be seen and better understood.

For more information about "Behind The Scenes" Photo Contest, visit the SHOOT's website here: http://BTS.SHOOTonline.com Participation in this contest is subject to the official rules at http://btsPhotoContestRules.SHOOTonline.com

* Your photo(s) entries must be shared publicly and in accordance with Instagram, Twitter and Facebook’s Terms of Use (http://instagram.com/about/legal/terms/, https://twitter.com/tos, https://www.facebook.com/legal/terms). There is no limit on the number of photos entrants may enter to be considered during the Entry Period, as long as no photo is a duplicate of a previous entry. Entrants acknowledge that this Contest is in no way sponsored, endorsed or administered by, or associated with Facebook, Instagram or Twitter. Entrants acknowledge that any information they provide in connection with the Contest is provided to the Producer and not to Facebook, Instagram, or Twitter. Any questions or comments regarding the Contest must be directed to the Producer; not to Facebook, Instagram, or Twitter. Entrants release Facebook, Instagram and Twitter and its associated companies from any and all liability claims arising in respect of the Contest..