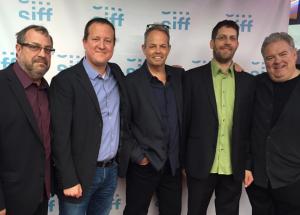 The Chicago International Film Festival (CIFF) recently announced that "Middle Man," the debut feature from Chicago-based writer-director Ned Crowley, will screen as an official selection in its 52nd edition, which is set to run October 13-27. The ultra-dark comedy also recently opened the Portland Film Festival, and it is also slated to appear in competition at the 2016 Austin Film Festival in October.

When "Middle Man" earned its very first festival bow earlier this year at the 42nd edition of the Seattle International Film Festival (SIFF), Crowley (who is the Chief Creative Officer of mcgarrybowen in Chicago) and the film's main star Jim O'Heir (of "Parks and Recreation" fame) proudly announced the news on Kickstarter, where the film successfully raised part of its budget thanks to 862 backers. At that time, Crowley detailed two SIFF screenings for "Middle Man," as well as an awards breakfast they'd been invited to attend. "Our entire goal for the film was to make something we were proud of, to make it into one festival, and to have a beer afterwards and feel like we accomplished something," Crowley explained. "That happened when we sold-out the Friday screening, and the reaction was overwhelmingly positive.

"At the awards breakfast," he added, "the grand jury critics started reading a description of the film that won the New American Cinema Grand Jury Award, and I was like, 'wow, I should go see that. That sounds like the kind of film we were trying to make.' Then they read our name, and we fell out of our chairs."

In the actual words of the SIFF jurors: "Middle Man's impressive script, terrific performances and fresh, innovative approach to storytelling were inspirational. Its provocative and darkly comic nature gave it the feel of a fable and dared to let us guess what was real and what wasn't. Ned Crowley shows us that gruesome events are tragic, yes, but they can also be hysterically funny."

In celebration of the film's acceptance into CIFF, Crowley and his key collaborators wanted to shine more light on the role of Chicago and many of its artisans in bringing "Middle Man" to life. Crowley, who also wrote the 2008 independent feature "Parting Words," as well as authoring and illustrating many children's books, pointed out the many ways in which "Middle Man" is a Chicago production, despite it being filmed primarily on locations in California and Nevada.

"Jim O'Heir and I met doing comedy in Chicago in 1987, and have been friends ever since," he began. "In the film, the story starts out in Chicago, and much of our support came from here. Our second lead actor, Andrew West, is a native of Gary, Indiana. Also, all of the post-production took place here, thanks to Cutters Studios, which had everything to do with our low-budget film looking like it cost millions."

The efforts at Cutters spanned from editorial – in the hands of partner and editor Chris Claeys, who Crowley said "was there from the start," and was the greatest contributor of time to the project other than himself – to visual effects, color-grading and finishing (thanks to Brian Higgins of Flavor), as well as sound design and final mix of the surround soundtrack (courtesy of Drew Weir of Another Country).

"From the onset, Cutters Studios was excited to post-produce Ned Crowley's directorial debut," Claeys professed. "Thanks to countless collaborations over many years, everyone on our staff knows and appreciates Ned's passion for his work. For each of us, it was an honor to assist Ned with all the post-production needs of the film."

For Claeys, his epic journey on the film officially began well before principal photography. "Ned drew 1,500 rudimentary pictures of the script as a storyboard, then he organized a table reading of the script with himself and Jim O'Heir," he continued. "With Ned's assistance, I took those storyboard frames and the reading, and we cut an animatic 'layout' of the film. I cannot emphasize enough how that plugged both of us into the script from a flow perspective. By the time the beautiful shots from director of photography Dick Buckley started arriving in the edit room, I knew exactly where they needed to go in the film's structure."

Claeys and his Cutters Studios colleagues have many more technical details to share on their timeline and workflows as the project came together. From the executive producers Roger Petrusson and William Fortney, to the director, cast, crew and everyone who has supported the production, everyone is hoping that interest will rise in the months ahead, as the film reaches new audiences across the country, and around the world.

Having spent so much time watching Crowley's ideas gel into a cinematic gem, Claeys is in a unique position to assess the film's most powerful scenes. He suggested that viewers look for "the moment when a bloody Lenny is on stage doing a routine," as one of his personal favorites.

To Crowley, knowing that much of the entertainment industry is focused on tent-pole blockbusters and episodic TV, he remains cautiously optimistic about what's to come for "Middle Man." "Hopefully we ride some more festivals and we find the ones where it can get a following," he said. "But you know what? I already had that beer, so everything else is gravy."