Nominees Announced For The 67th Annual ACE Eddie Awards Recognizing The Best Editing Of The Year In Film, Television And Documentaries 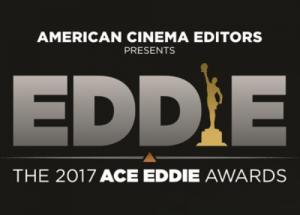 American Cinema Editors (ACE) today announced nominations for the 67th Annual ACE Eddie Awards recognizing outstanding editing in ten categories of film, television and documentaries.  Winners will be revealed during ACE’s annual black-tie awards ceremony on Friday, January 27, 2017 in the International Ballroom of the Beverly Hilton Hotel and will be presided over by ACE President, Stephen Rivkin.

As previously announced, J.J. Abrams will receive the ACE Golden Eddie Filmmaker of the Year award.  Two Career Achievement honorees will be announced later this week.

Manchester by the Sea
Jennifer Lame

Everything is Copy
Bob Eisenhart, ACE

We Will Rise: Michelle Obama's Mission to Educate Girls Around the World
Oliver Lief

This is Us: “Pilot”
David L. Bertman, ACE

Game of Thrones: "Battle of the Bastards"
Tim Porter, ACE

Stranger Things: "Chapter One: The Vanishing of Will Byers"
Dean Zimmerman

The Night Of: “The Beach”
Jay Cassidy, ACE

Final Ballots will be mailed on January 6 and voting ends on January 17.  The Blue Ribbon screenings where judging for all television categories and the documentary categories take place January 15.  Projects in the aforementioned categories are viewed and judged by committees comprised of professional editors (all ACE members).  All 850+ ACE members vote during the final balloting of the ACE Eddies, including active members, life members, affiliate members and honorary members.

About AMERICAN CINEMA EDITORS
AMERICAN CINEMA EDITORS (ACE) is an honorary society of motion picture editors founded in 1950.  Film editors are voted into membership on the basis of their professional achievements, their dedication to the education of others and their commitment to the craft of editing.

The organization publishes a quarterly magazine, CinemaEditor, highlighting the art, craft and business of editing and editors.