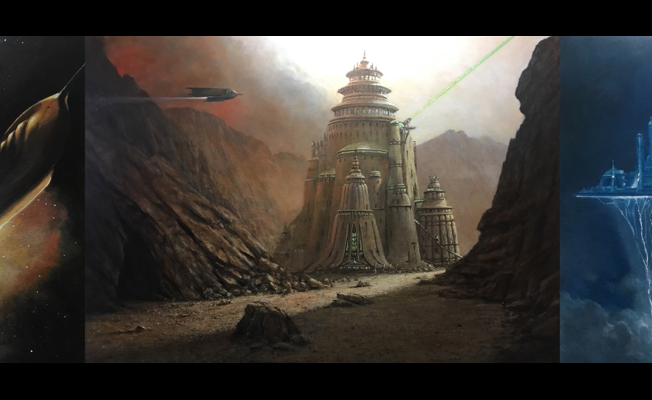 Fantastic Voyage will feature personal artwork of over 60 artists who are ADG members including Production Designers & Art Directors; Scenic, Title and Graphic, Artists; Set Designers and Model Makers; Illustrators and Matte Artists and others who work in the motion picture and television industries. Artwork by Syd Dutton
ADG Gallery 800 Presents "Fantastic Voyage" Celebrating the Genres of Sci-Fi, Fantasy & The Metaphysical Realm 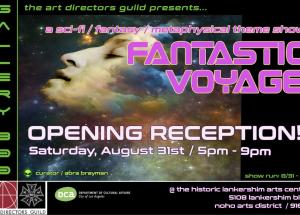 The Art Directors Guild's Gallery 800 (ADG, IATSE Local 800) presents FANTASTIC VOYAGE, an exclusive mixed media exhibition celebrating the genres of Sci-Fi, Fantasy & the Metaphysical Realm. The public will have a unique opportunity to meet and mingle with the artists at the exhibit openingand hosted reception on Saturday, August 31, 2019 from 5:00 - 9:00 p.m. The Fantastic Voyage exhibition will run through November 2nd. Gallery 800 is located in the historic North Hollywood Arts District at 5108 Lankershim Boulevard.

In addition, Gallery 800 will showcase the work of two legendary Art Directors who are in the ADG Hall of Fame: Harper Goff (1911-1993) best known for his work on Fantastic Voyage, 20,000 Leagues Under The Sea, Willy Wonka & the Chocolate Factory and Casablanca, and Dale Hennesy (1926-1981) whose credits include Fantastic Voyage, King Kong, Logan's Run, Young Frankenstein, Sleeper, Dirty Harry, Annie and South Pacific.

HARPER GOFF (1911 – 1993) was an American Production Designer, Art Illustrator, artist, musician, and actor. He became a Set Designer for Warner Brothers for Academy Award® winning films such as A Midsummer Night’s Dream (1935), Charge of the Light Brigade (1936), Sergeant York (1941) and Casablanca (1942). Goff joined the artistic team at Walt Disney Studios in Los Angeles, where he was the Art Director for 20,000 Leagues Under the Sea (1954) and is credited with designing the exterior of the Nautilus, along with every set/compartment within the submarine, as well as many of the inventive effects in Disney’s first live-action picture. The film went on to win Oscars® for Best Art Direction-Set Decoration (Color) and Best Effects, Special Effects. Years later Goff created the submarine Proteusfor the Oscar® winning film Fantastic Voyage (1966) and art directed the highly acclaimed Willy Wonka & the Chocolate Factory (1971). He was one of Walt’s first Imagineers and had a huge influence and contributed heavily to the concept art for what is now Disneyland, including Main Street U.S.A. and the Jungle Cruise, as well as working on EPCOT Center, the World Showcase, and several other Walt Disney World theme parks around the world.

Academy Award® winner DALE HENNESY’s (1926 – 1981) career as an Art Director and Production Designer spread over several different film genres: comedy, adventure, sci-fi, crime drama, and musical. He did illustrations for South Pacific (1958), then began with comedies such as Under the Yum Yum Tree (1963), Good Neighbor Sam (1964), In Like Flint (1967), and Everything You Always Wanted to Know About Sex * But Were Afraid to Ask (1972). His science fiction and fantasy credits include Young Frankenstein (1974) for which he won a Golden Scroll from the Academy of Science Fiction, Fantasy & Horror Film, Sleeper (1973), King Kong (1976), Logan’s Run (1976) for which he received an Oscar nomination, and Fantastic Voyage (1966), which won him an Academy Award. Hennesy’s work in the crime drama genre included Slither (1973) and Dirty Harry (1971). Hennesy’s last film, Annie (1982) earned him another (posthumous) Academy Award nomination.
Gallery 800, located in the heart of the Noho Arts District, showcases Guild members’ personal artwork in a series of shows throughout the year. These talented artists are leading art department professionals, who, through a combination of observation, passion and imagination, bring the writer's words and the director's vision to life in television and film. When not working as integral creative members of the entertainment community, they contribute to the fine art scene with their personal artwork. Since Gallery 800 opened its doors in March 2009, more than 900 ADG members have shown their artwork in the ongoing exhibitions. The next Gallery 800 2019 Exhibit will be Art Unites 13 (Nov. 23, 2019 – Jan. 12, 2020).