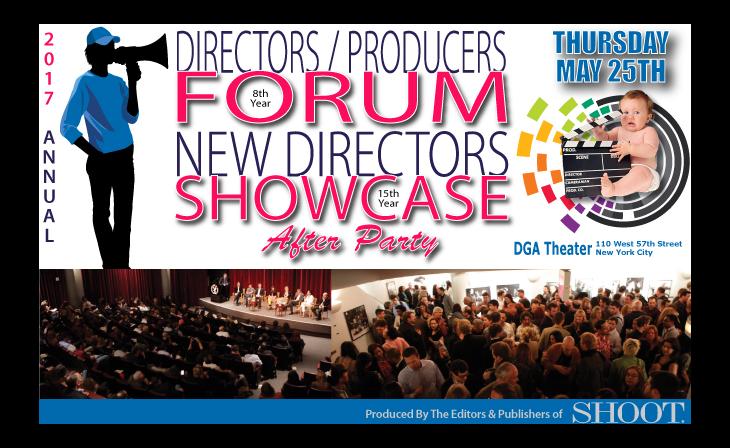 Join SHOOT and our 2017 Event Sponsors for an informative and entertaining afternoon at the SHOOT Directors/Producers Forum followed by a fun-filled evening including the debut screening of SHOOT's 15th Annual New Directors Showcase reel, Meet the New Directors panel and after-party. Register at http://eventregister.SHOOTonline.com 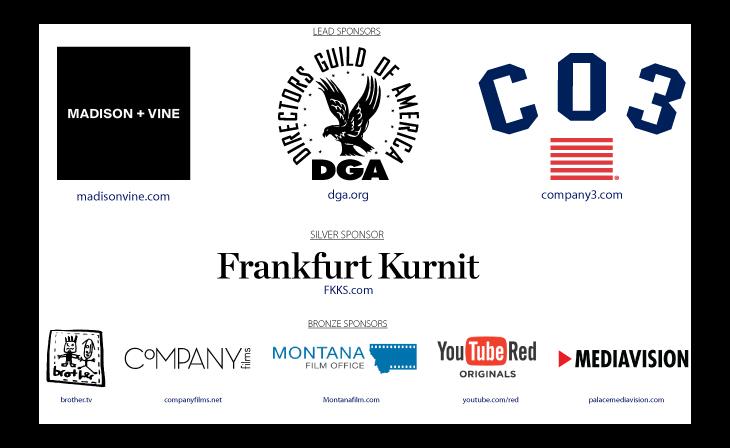 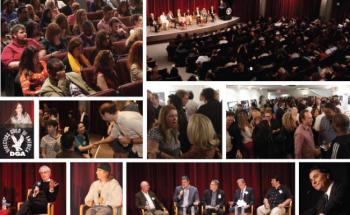 SHOOT Magazine, the leading publication for commercial and entertainment motion picture production, today announced the panels and speakers for the SHOOT 2017 DIRECTORS/PRODUCERS Forum.  The Forum will take place at the DGA Theatre on Thursday, May 25, 2017 from 1:30-5:00PM ET.  The SHOOT 2017 15th Annual New Directors Showcase will immediately follow the Forum from 5:30-9:30PM ET.

Register today to join SHOOT and our 2017 Event Sponsors for an informative and entertaining afternoon at the SHOOT Directors/Producers Forum followed by a fun-filled evening including the debut screening of SHOOT's 15th Annual New Directors Showcase reel, Meet the New Directors panel and after-party.

A Unique Event That Is Always Interesting, Informative and Entertaining, Join Us From 1:30-9:30PM ET
Make your business calls in the morning, then unplug and spend the afternoon and evening listening to a cross-section of speakers who are commercial & entertainment production executives, leading directors and up-and-coming directors.  Creative and Production executives from Agencies, Brands, Production and Post companies, Movie Studios, TV, Cable and Online Networks are welcome to attend at no charge as are directors, cinematographers, editors and other production/post industry artisans.   The daytime Forum will include several provocative & entertaining panels and speakers providing insights into where our industry is headed creatively and from a business standpoint.  Gain perspectives on and visions of what's in store so that you and your company can stay ahead of the curve, continuing to be relevant in an evolving marketplace.  During the evening New Directors Showcase agenda, you'll get a look-see at and meet some of the best up-and-coming directors who based on their initial work show promise to make positive contributions to advertising and/or entertainment in its traditional and hybrid forms. Having your finger on the talent pulse of the business is a perennial must to stay plugged into the present and future of our industry. Following the Showcase Screening, we'll hear from several of them about work to date and plans for gaining exposure in the marketplace --along with critiques/observations from several industry pros. And, the after-party affords attendees the opportunity to meet many of the new directors, mingle with industry friends and meet potential collaborators and clients.

Here's a look at the Afternoon & Evening Agendas...

2:00-2:30PM    Documentary Storytelling: A conversation on YouTube Red's This is Everything: Gigi Gorgeous
Depicting one of today's most relevant social issues through raw documentarian storytelling, transgender YouTuber Gigi Gorgeous opened up about her life's journey in YouTube Red's This is Everything: Gigi Gorgeous, directed by two time Oscar awarding winning director Barbara Kopple. With the global reach of YouTube, the panelists will talk through the production of the documentary, as well as the importance of telling Gigi's story to a diversity of cultures and people, educating viewers among all, of the power of love and family. This is Everything: Gigi Gorgeous portrays the intimate journey of Gigi Lazzarato, a fearless young woman who began life as Gregory Lazzarato, posting beauty and fashion videos to YouTube from his bedroom, who came out as a transgender female to an audience of millions. The film provides a revealing look into a life that never compromises happiness, and spotlights a family’s unconditional love for a child. Attendees will also learn more about YouTube Red's original series, movies and documentaries from storytellers across the globe and the opportunities that exist for directors and production companies to work with them.
Watch the film's trailer
Panelists

2:35-3:30PM      Directors and Producers’ Perspectives: The ever-evolving Industry
Directors and Producers discuss the evolving advertising and entertainment landscape, including creative, production and business issues. Perspectives on agency in-house production, the integrated production model with production and post under one roof, commercial production houses extending their reach into TV and features, feature producers scouting commercialmaking talent for features, career development for all directors, and diversification into VR and AR, among other topics.
Panelists:

3:35-4:05PM      Legal Aid: Need-To-Know Info For Directors, Production Cos & Their Collaborators in Commercials, Entertainment
Leading attorneys from Frankfurt Kurnit Klein + Selz (FKKS) will discuss contracts, career development, moving into film, branded content, what directors are responsible for and other issues relevant to their careers. They’ll also provide insights for commercial directors on moving into film & TV and vice versa.
Presenters:

6:00– 7:00PM    SHOOT 15th Annual New Directors Showcase Reel Screening
See the work that earned the 32 directors/directing teams in the Showcase their slot as a finalist.  While we don't discuss the affiliations of the directors or talk about their work prior to the event, you can find out their names - Click Here to see who they are!

7:00 – 8:00PM    Panel: Meet the SHOOT 2017 New Directors
Several of the new directors share insights into their work and future goals. An Ad Agency and Production Company exec join the discussion to add their perspectives on working with new directors.
In addition to the new directors on the panel we'll hear from:

8:00 – 9:30PM    The After-party
Head downstairs for food, drink and great conversation; join us to celebrate the 15th Anniversary of the SHOOT New Director Showcase with industry friends, talk to potential collaborators and clients and meet the event panelists, speakers, sponsors and directors in the NDS Showcase.

SHOOT Announces And Thanks our 2017 Sponsors - we could not do it without you!
Click Here for brief information on each Sponsor and click their names below to visit their web sites.
Lead Sponsors

Since we do not charge commercial and entertainment production/post executives and artisans to attend, SHOOT with the invaluable help of our sponsors  completely covers the cost of producing the event.  It is especially gratifying to have such a great group of returning and first-time sponsors this year.  We thank them all very much!  Company 3 will again be hosting a special by "Invitation Only" Breakfast and Color Correction Workshop for the directors in this year's SHOOT New Directors Showcase at their facility on the morning of May 25th before the Forum - SHOOT, along with all the new directors who have experienced  that wonderful session in the past greatly appreciate it.

PLEASE NOTE: We are limited to 436 seats in the Theater and the event is filling up fast.  We will do our best to accommodate all registration requests, but we may not be able to accommodate everyone.  We would greatly appreciate it if you DO NOT fill out the registration form until you are certain that you will be able to attend and if you register, and then find that you are unable to attend, please let us know so that we are able to include someone on the waiting list.

Att: SHOOTonline Members
Any SHOOTonline PLUS members registering for this event are guaranteed a ticketed seat and all PLUS Members will receive the PDF Attendee Directory whether or not they attend. Purchase SHOOTonline PLUS Memberships Here. Guaranteed Seating is also available to: Selected Directors in the 2017 New Directors Showcase + one guest, Event Speakers/Panelists, Sponsors & Sponsor Guests.
Those who qualify for guaranteed seating must still register here as we only keep one Master list.

SHOOT® announced today that the 2020 SHOOT New Directors Search is officially open for 2020 entries. This will be SHOOT's 18th annual worldwide search to discover the best...

SHOOT® announced today that the 2020 SHOOT New Directors Search will officially open on January 2, 2020. This will be SHOOT's 18th annual worldwide search to discover the... 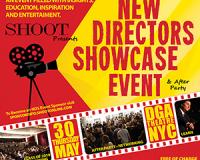 SHOOT Sets Panels and Announces Sponsors For May 30th New Directors Showcase Event At The DGA, NYC
Wednesday, May. 22, 2019

SHOOT Magazine, the leading publication for Film, TV & Commercial Production and Post, today announced the panels and speakers for the SHOOT 2019 New Directors Showcase Event to take place at the Directors Guild of America (DGA Theatre) in... 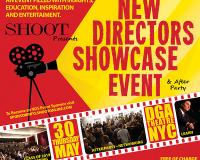 SHOOT® Magazine, the leading publication for Film, TV & Commercial Production and Post, today announced the names of the 32 individual directors and 2 directing duos who made the final cut to be included in the SHOOT 2019 17th Annual New... 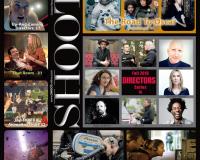 SHOOT is pleased to announce the content lineup for it's first semi-annual Directors and Cinematographers Issue of 2019.  The PDF version of the Issue will be posted on SHOOTonline on March 29 and emailed to 28,000 opt-in subscribers on 4/1.  The...