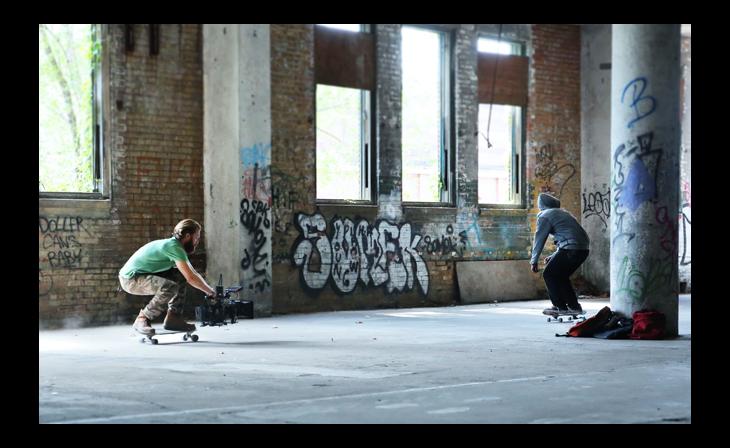 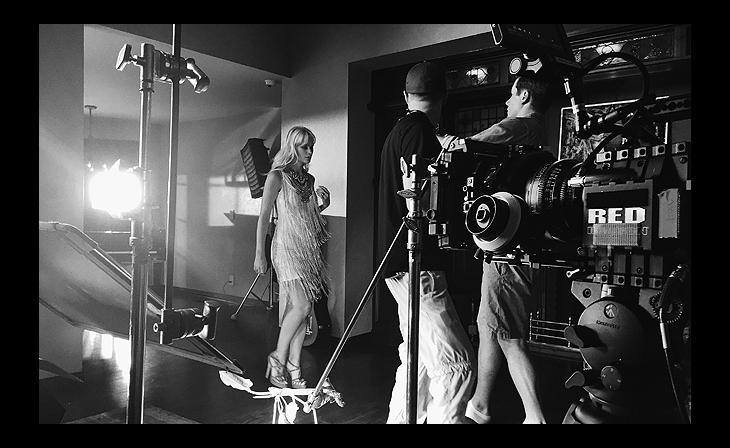 The Red Dragon awaits its turn as co-director, Andrew Fairbank and DP Jacob Abrams catch the magic on set with model Lauren Bennette for Devonne by Demi Lovato. This Runner-Up image was shot using an iPhone 6 in Tarzana, CA. Photo credit: Gerrad Wilson 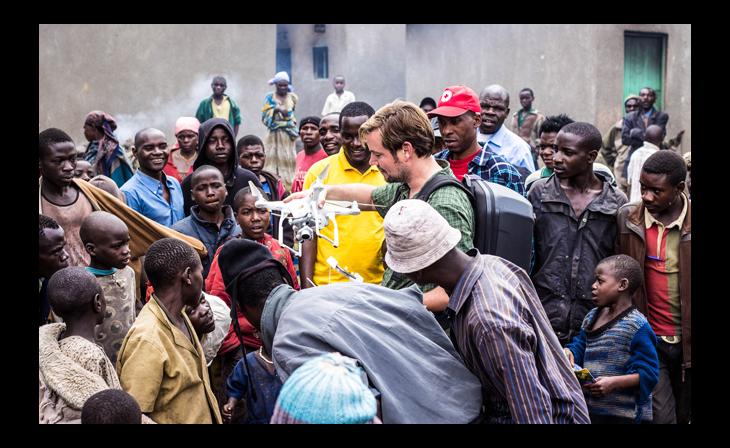 Shooting a documentary, in Rwanda, we met a lot of curious people. Introducing technology to the locals gets an Honorable Mention. Photo credit: Mads Schmidt Rasmussen 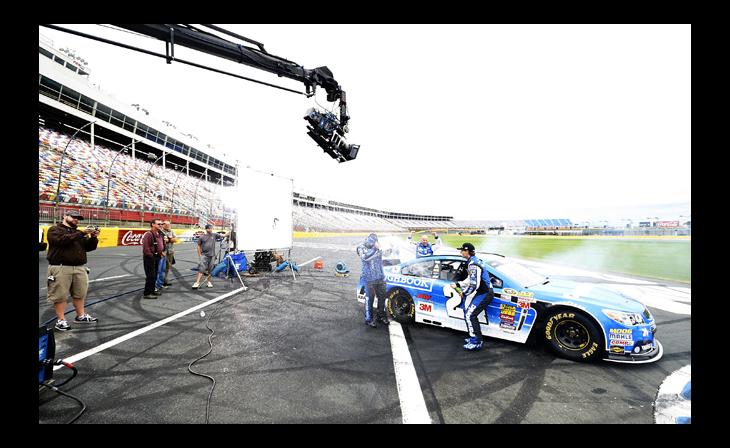 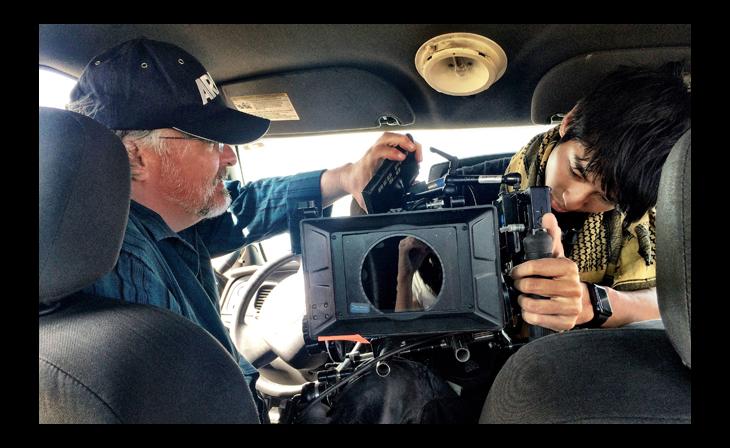 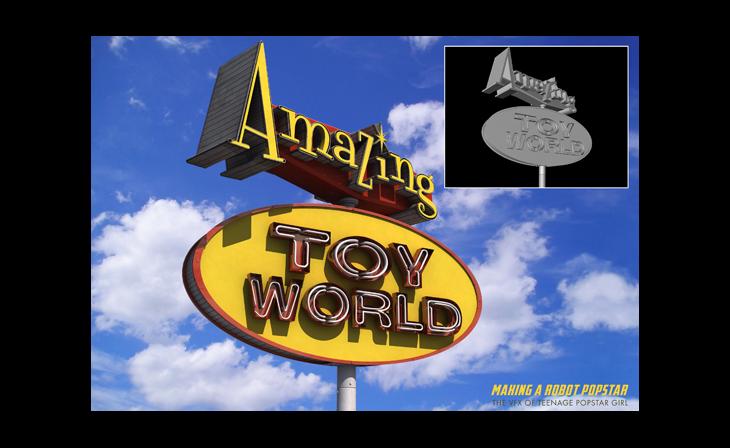 Another Honorable Mention goes to this 3D render of toy store sign from "Making a Robot Popstar" a behind the scenes look at 'Teenage Popstar Girl.'" Photo credit: Daniel Azarian 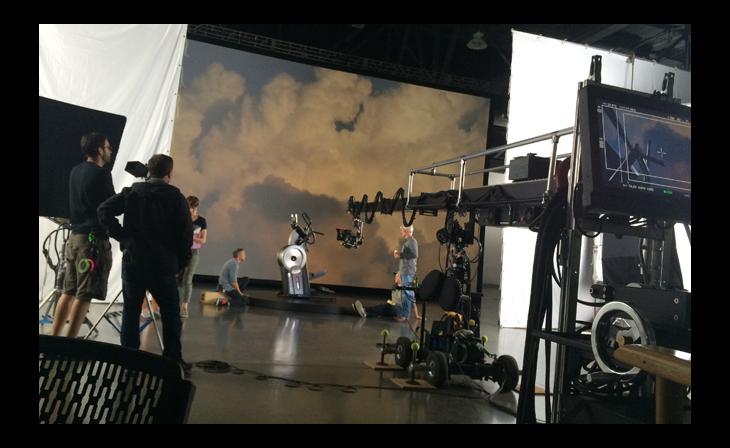 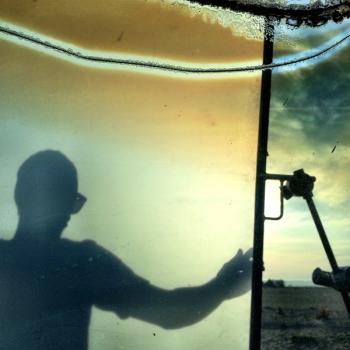 SHOOT held its first bi-annual Behind The Scenes Photo Contest this past summer and was pleased to award the grand prize of $500 and a SHOOT Premier membership, to photographer Timothy D. Kanieski.  An award-winning photographer, Tim used a Canon EOS 5D to catch cinematographer Steven Holleran shooting a skate sequence with Kirby Metzger, from his Sector 9 board holding a Red Dragon with Master Anamorphic lens, for the Sundance Film The Land. Distributed by IFC Films, The Land was shot on location in Cleveland, Ohio. This particular winning shot (shown above) is in the abandoned Westinghouse Electric Factory there. Tim's winning photo was published on the cover of SHOOT Magazine's Fall Issue and was featured inside the issue. Tim currently works as a location manager and unit stills photographer for many of the features filmed in Northeast Ohio.

Gerrad Wilson, CEO of MEGA Media Entertainment, landed the runner-up selection winning a $250 Starbucks gift certificate and a SHOOT Premier membership. Gerrad took the runner-up shot, using an iPhone 6, of Andrew Fairbank and DP Jacob Abrams on set, at a private home in Tarzana, CA, with model Lauren Bennette for Devonne by Demi Lovato. Gerrad was the co-director of this commercial shoot and is the CEO of MEGA Media Entertainment, the production company who produced the work. Gerrad's photo was featured inside SHOOT Magazine's Fall Issue. LA-based MEGA is a “one stop shop” Emmy Award®-nominated production company.
Honorable mentions (all photos shown above) go to:

Each received a mention in SHOOT Magazine's Fall Issue and will receive a one year complimentary SHOOT Plus membership including a MySHOOT Talent Profile.

The SHOOT Behind The Scenes Photo Contest is held bi-annually during Emmy season (summer) and during Academy season (winter). The Contest is FREE to enter and is open to all amateur and professional photographers in the United States, Canada, and worldwide. The Winter contest will open for entries on December 1st, 2016 at 12pm ET. There is no limit to the number of photo submissions per entrant.

About Timothy Kanieski
Timothy D. Kanieski began his career in photography shortly after graduating from New York Film Academy, and as he worked toward his degree in history and political science, at Baldwin Wallace College. Timothy has shown his works in a number of galleries and juried art shows, where he has won several awards.  While most of Timothy’s fine art work is not specific to any locale or subject matter, it does tend to celebrate the grittier side of his subjects. Still, as a corporate photographer, Timothy has been commissioned to work on many diverse photographic projects.  Eventually commissioned work lead Timothy back to his passion for film, as he began location scouting for various productions.  A member of IATSE, Timothy currently works as a location manager and unit stills photographer for many of the features filmed in Northeast Ohio. www.kanieski.net

About Daniel Azarian
Daniel Azarian is an award-winning filmmaker and director of branded entertainment and commercials. He has helmed national television spots for blue-chip brands as well as advertising on mobile networks in the U.S., China and the UK. Brands that have featured his work are 3M, Sony Music Entertainment, Horizon Organic, PBS, AOL Music, Perez Hilton and The Anti-Violence Project.  Selected credits include the music video "There Will Never Be Any Peace" for the Grammy award winning The Blind Boys of Alabama, the Public Service Announcements “Save Lolita," and “Bullying is Violence,” the award-winning music video “Teenage Popstar Girl,” “Building the New World Trade Center” for Silverstein Properties and the documentary short “A Day in the Life of Lolita the Performing Orca.”  He recently directed the stop-motion animation video “Mass Extinction No. 6” for the band Whisperado, which dramatizes the assault on the Earth's environment.

About Mortimer Jones
Mortimer Jones is the directing team of Chris Walldorf and Adam Stone. While they direct as a team, Adam is a highly accomplished director of photography and Chris is a well-known editor.  Wondersmith serves brands and their agencies that use smart storytelling, bold content and flawless execution to set themselves apart. From creative contributions to location productions anywhere in the world – and top-tier animation, visual effects, editing and finishing. http://wondersmith.tv/

About Renee Faia  (Director/Writer/Actor)
Renee Faia is an award-winning director/writer/actor/musician, whose directing credits include , You Say (music video) to be released November 2016 for The Ten Five Sixty, Julie Drinks (music video) for the band Willodean (2015 International iPhone Film Festival winner) and Summer Wine (music video) for her band, THE NAZARENES (2014 iPhone Film Festival winner). In addition to directing and acting, Renee worked behind the scenes as an art director, set decorator, set designer, model-maker, make-up artist, photographer and voice over performer. Her first acting role was in The American President, which Rob Reiner cast her in after working with her behind the scenes on A Few Good Men.  She received critical acclaim for her follow-up roles as Cher in And The Beat Goes On: The Sonny & Cher Story, Disney’s Where The Red Fern Grows with singer Dave Matthews, and High Roller with Michael Imperioli, which received a Prism Festival Award and Audience Award at the Nashville Film Festival. Director Neil Burger (Divergent) cast Renee in his first film Interview With The Assassin, which was nominated for three Independent Spirit Awards.  Renee has also guest-starred on Seinfeld, ER, Private Practice, and Everybody Loves Raymond .  Renee stars in, Loveology, a short film by HBO Project Greenlight director Mark Manalo, which is currently doing the festival rounds and can be seen November 19th at the New Filmmaker Film Festival in Los Angeles.  Currently Renee is in post-production with Beautiful Dead Things, a short film that she wrote, co-directs and acts in.
About Jacque Janes
Jacque Janes ( www.jacquejanes.com) Graphic Design/ Art department.  Although a touch up artist and graphic designer, Jacque was quick with her camera to capture the abstract picture on set, with Director/Cinematographer Jimmy Matlosz as he consults with the art department.
About Mads Schmidt Rasmussen
Mads Schmidt Rasmussen (MVDS) is a talented young Danish entrepreneur, filmmaker, award-winning photographer, and adventurer, with an eye for his craft. Over the years MVDS has worked with different brands, won awards and has developed fine skills. With keen to the small details, MVDS experiments with the craft of videography, creating extraordinary visuals.  In all of his works, he makes sure to incorporate motion and uses it as a better connection between stories and different clips. He sees himself as a bit of a go-getter, he loves interacting and he is up for any challenge. Checkout his work on Instagram Facebook or his website at MVDS.DK
About The SHOOT Behind The Scenes (BTS) Photo Contest
The Contest is a fun, simple, showcase opportunity for Film, TV, Commercials, Music Video and Web Video Content Producers who are creating, shaping and defining motion picture production and post. Fascinating, ingenious, creative people read and follow SHOOT everyday.  The contest gives a glimpse into the motion picture creation process, be it movies, music videos, commercials, or web videos. An insider’s perspective into you, your project, your team or your company, our industry.  Whether on location or in the studio we want to see our readers and followers doing what they do best... producing and finishing motion pictures!
The SHOOT BTS Photo Contest is for any motion picture production or post crew members & actors to enter BTS photos from Films, TV, Commercials, MVs, and Web videos.  The Contest is a perfect showcase opportunity for those who are creating, shaping and defining the world of the motion pictures production and post. The Contest is open to all amateur and professional photographers in the United States, Canada, and worldwide except where prohibited by law including actors, producers, writers, directors, cinematographers, editors, vfx artists, music & sound designers, production designers, art directors, costume designers, make-up artists, special effects gaffers & grips, carpenters, vfx animators, music & sound mixers, set unit still photographers, ADs, PAs, publicists, legal advisers, location managers, and others involved BTS in the filmmaking process. Participation in this contest is subject to the official rules at http://btsPhotoContestRules.SHOOTonline.com
The SHOOT BTS Photo Contest is a fun opportunity for our readers to participate in documenting and showcasing who they are and what they do every day. The types of photographs we're interested in seeing are listed below and should be interesting, fun, surprising and creative:

The contest is FREE to enter and photographers of all abilities are invited to submit photos (during entry periods) at http://BTS.SHOOTonline.com or on SHOOT's Facebook page here (FB best for uploading via mobile device (i.e. iPhone or iPad). BTS photos can also entered using your own valid Facebook, Instagram or Twitter account by using the hashtag #MySHOOTbts in the caption to the post. There is no limit on the number of photos entrants may enter to be considered during the Entry Period, as long as no photo is a duplicate of a previous entry. Images must have been taken no longer ago than 3 years prior to the entry's submission date. People may vote for multiple entries; however only one vote per person will be allowed per entry, per day during the voting period.

All contest photos will be displayed at http://BTS.SHOOTonline.com in a gallery and on SHOOT's Facebook page here.  Submissions must identify the location of the photo. 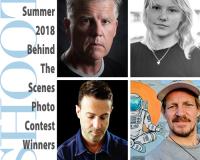 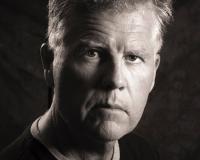 The Editors & Publishers of SHOOT Magazine and SHOOTonline.com, the leading publication and website for professional... 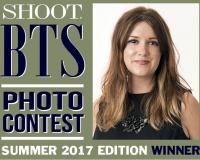