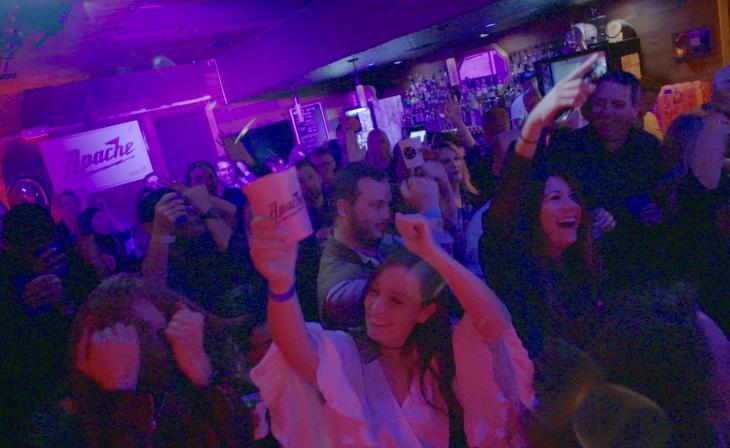 On hand for SXKO at The Craftsman were agency folks as well as reps from independent film companies and global brands. 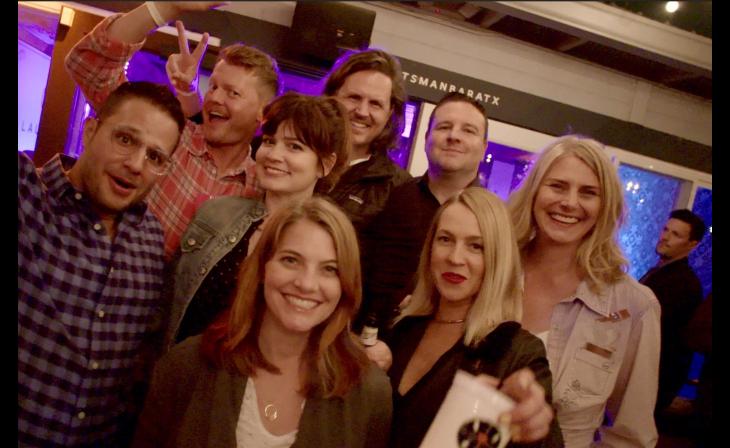 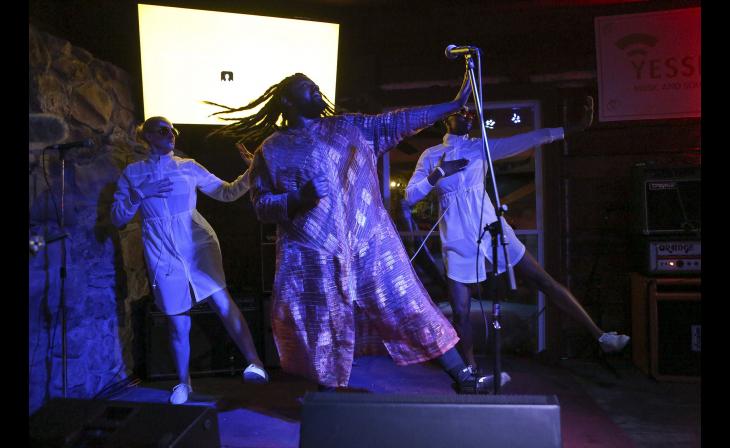 Tunde Olaniran brought his Afro-futurist mix of hip-hop, R&B and funk to the stage, along with his dancers. 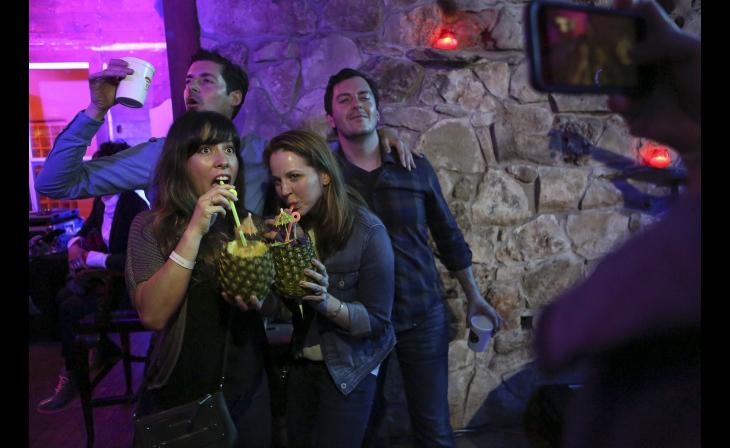 The party hosts say SXKO has become a place where you can reconnect with old industry friends and colleagues and make new ones. 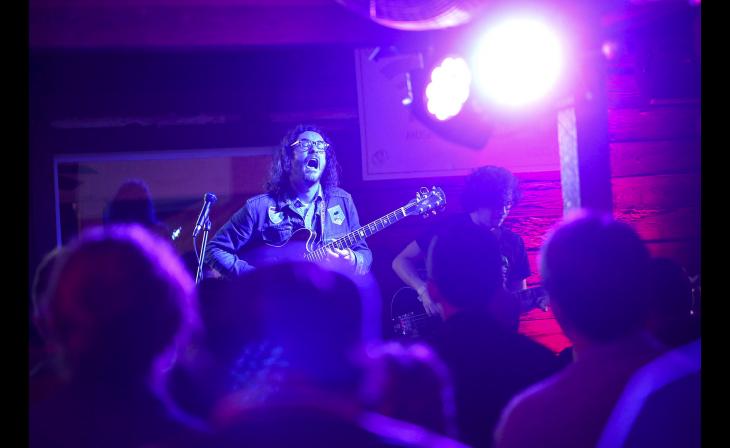 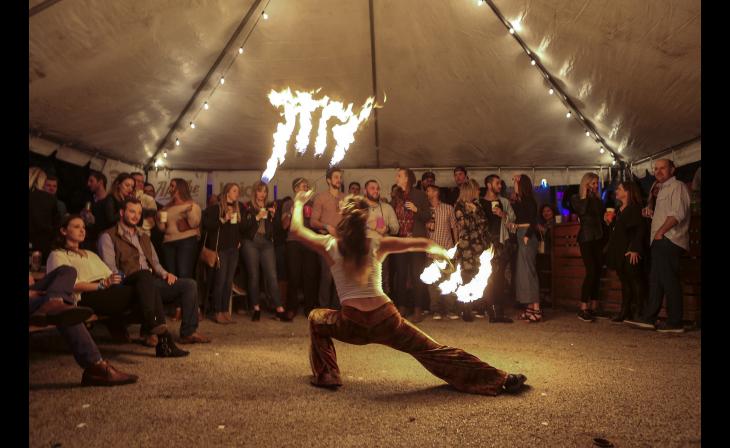 The floor show was hot as the SXKO crowd spilled over to the The Craftsman's tented outdoor venue. 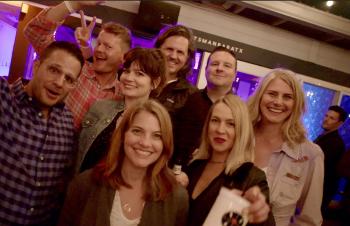 The crew from Synthetic, Yessian, Apache, Union and Laundry have made their annual SXKO opening night party a must-have ticket.
Sixth annual launch party in Austin attracts hundreds of guests for music, drinks, mingling and a dose of festival buzz.
Austin, TX
--(SPW)--

One year Obama stopped in next door and added an air of excitement while tying up traffic. Another year a cowboy rode into the party on a white horse. Another year there was a celebrity poker match, although the party organizers won’t divulge who the celebs were, or how much they lost. And then there was the burlesque show…

It was no different this year, as fire dancers lit up the scene and live music rattled the windows at the sixth annual ‘South By Kick Off’ party – the unofficial opening night bash of this annual festival of music, media, technology and innovation – which every year attracts partygoers from agencies, production houses, post studios and music companies.

The 2018 edition of SXKO, which took place on Friday night, March 9, at The Craftsman, was once again brought to you by Synthetic, the L.A., Austin and New York-based production house, and Yessian Music (https://www.yessian.com/), the Detroit, New York, L.A. and Hamburg, Germany-based original music and sound studio, which have been the party’s anchor hosts since the very first event back in 2013. On hand from Synthetic were Austin native and founding director Justin Corsbie, his partner and EP, Allison Smith, along with Brandon Franklin and Michael Gonzales. Representing Yessian were EP Michael Yessian, along with Andy Grush, Katie Overcash and Evelyn Brown McWilliams.

Among the agency and production company guests who made the scene were creatives and producers from shops like 72andSunny, Wieden + Kennedy, Publicis, Mullen Lowe, McCann, Y&R, Deutsch and GSD&M. Also on hand were people representing such international brands as Condé Nast’s Vogue, Chanel, Bose, Dell and Qantas. And this year saw a group of independent feature film executives and crew.

For the party hosts, SXKO has become more than just a bash. “It’s really hit its stride,” says Synthetic’s Allison Smith of the event. “The core group of hosts have been working together for many years, both on this party and on commercial and branded projects. That’s created a sense of camaraderie, and the party has turned into a celebration of what we do individually and collectively. Sharing a laugh with longtime friends, toasting the work we’ve created and introducing each other to some great new contacts has become a theme of SXKO, and many people commented on the clear affection we have for each other. That means a lot at a time when competition is at its height. To have friends and colleagues in the industry lifting each other up is infectious, and people want be a part of it.”

Indeed, word of mouth has made SXKO the place to be on SXSW’s opening night. “Friends tell friends who tell more friends,” explains Apache’s LaRue Anderson. “It’s evolved organically over the years.

“Our party gives old friends a chance to reconnect and new friends the chance to raise a glass and get to know each other in a relaxed environment before the big week of meetings and events starts,” Anderson continues. “I met women editors, composers and a young female DP, and we all agreed that this is an inspiring time to be a part of advertising. Everyone was talking about #inclusion, #metoo, #dietmadison, and how the political climate right now is supercharged and electric. People from all walks of our industry look forward to this night, which is attended by agencies, production companies, post houses and major brands. And our lineup of artists – White Denim, White Reaper, Tunde Olaniran and DJ Dangit – brought down the house, making it easy for us to dance the night away.”

As usual, SXKO featured performances from rising-star artists and a set from a top DJ, to make sure the event maintained the right tempo. This year’s lineup, curated by Yessian’s Michael Yessian, was headed up by White Denim, a rockin’ Austin quartet whose music is influenced by dub, psychedelic rock, blues, punk, prog rock, soul and jazz, to name just a few genres. Writing about ‘Holda You (I’m Psycho)”, a song from its 2016 album, “Stiff,” NPR said “their songs can be complex creations, full of instrumental turns that would make Steely Dan fans blush.”

Also performing was White Reaper, the Louisville, Ky garage punk band. Reviewing their latest album, 2017’s “The World’s Best American Band,” Pitchfork said “their work is smart, well-polished, and cheeky, loaded with more riffs than you can fit into the trunk of a Camaro.”  Tunde Olaniran took the stage as well, with his team of choreographed backup singers. Described as presenting an Afro-futurist mix of hip hop, R&B and punk, this socially progressive artist, now based in Flint, Michigan, was pegged by Rolling Stone as one of ten artists you need to know.  And back for a second consecutive SXKO performance was DJ Dangit, the local Austin talent better known as Gabe Vaughn, who, when not DJing, is a designer and photographer.

“The music lineup this year was on point! Amazing performances by three very different groups that blew the minds of the SXKO partygoers,” says Michael Yessian. “In addition to White Denim and Tunde absolutely killin’ it, White Reaper brought that garage punk sound to a new level.” Adds Yessian Music’s Evelyn Brown Williamson, “We’d heard the greatest things about the ATX-based band White Denim, but they overdelivered on expectation and had the crowd dancing like it was Woodstock for hours.”

Photos and video clips from the event were streamed live to social media during the run of the party, where they were “immediately intercepted by Russian trolls,” jokes Synthetic’s Justin Corsbie. “But it didn’t affect the outcome,” he added. “We had the most successful party in the history of the world. Period. Ever. #blessed. Lightning bolt emoji.” Check out #SKXO for more. 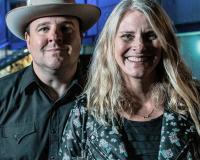 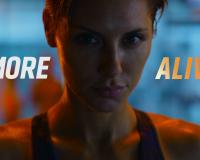 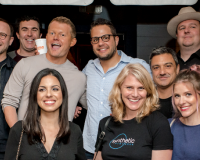 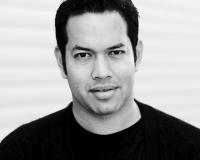 Synthetic Pictures and Yessian Music Team with Apache Digital, Beast and Ntropic To Start SXSW Off Right with the 4th ‘South By Kick Off’ Party
Wednesday, Mar. 16, 2016

It’s hard to compete with the star power of President Barack Obama, but a quintet of advertising’s top production and post production players did just that as they marked the start of the 2016 SXSW Festival with yet another rockin’ party....