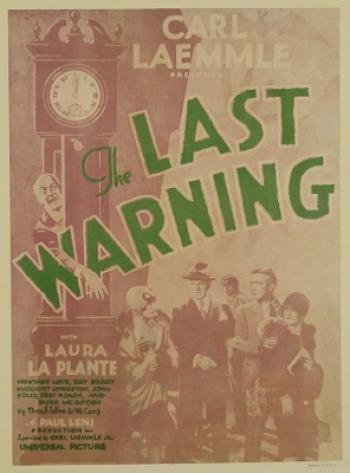 Universal Pictures announces the premiere of the restored 1929 silent film classic, The Last Warning. The film will screen on June 4, 2016 at the Castro Theater as part of the San Francisco Silent Film Festival.  Directed by Paul Leni and starring Laura La Plante, The Last Warning is a dramatic horror centered on an unsolved murder during a theatrical performance and the revival production meant to solve the mystery.  This restored version is a part of Universal's silent restoration initiative announced last year.

"The Last Warning is significant in Universal's history as it was Paul Leni's last film and a key role for Universal's leading lady of the 1920s, Laura La Plante," said Michael Daruty, Senior Vice President, NBCUniversal Global Media Operations.  "Through the silent film initiative, our two goals are to preserve the films for the future and share them with audiences."

Beginning in March 2015, Universal's team of restoration experts conducted a worldwide search for The Last Warning's available elements.  After extensive exploration, a 35mm nitrate dupe negative was located at the Cinémathèque française, and was loaned to the Studio. This French negative became the base element.  However because of its origin, the negative contained French title cards. In order to obtain the English title cards, Universal turned to a 16 mm English print from the Packard Humanities Institute Collection in the UCLA Film & Television Archive.  Universal's restoration team then replaced the French title cards with the English.

The Last Warning was directed by Paul Leni and stars Laura La Plante, a prominent Universal contract player known for her celebrated roles in Skinner's Dress Suit (1926), The Cat and the Canary (1927), Show Boat (1929), and King of Jazz (1930).  In this horror film, a producer reopens a theatre production, where one of his former actors had been murdered during a performance. The producer proceeds to stage the show exactly as it was with the exception of the murdered actor. The film was adapted from the 1922 Broadway play by the same name written by Thomas F. Fallon based on the story The House of Fear by Wadsworth Camp, the father of the writer Madeleine L'Engle.  The Last Warning first premiered in 1929 and was popular with audiences of the time.

Other silent film titles being restored by Universal include Outside the Law, Sensation Seekers, and Oh, Doctor!  The Universal Pictures silent film restoration initiative builds on the company's ongoing restoration commitment.  Since the program was first announced in 2012, nearly 50 titles have been restored and 25 more titles are expected to be restored by 2017.  Fully restored titles to date include All Quiet on the Western Front, The Birds, Buck Privates, Dracula (1931), Dracula Spanish (1931), Frankenstein, Jaws, Schindler's List, Out of Africa, Pillow Talk, Bride of Frankenstein, The Sting, To Kill a Mockingbird, Touch of Evil, Double Indemnity, High Plains Drifter, Holiday Inn, Spartacus, King of Jazz, and One-Eyed Jacks. 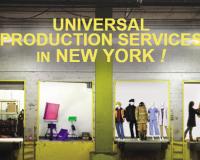 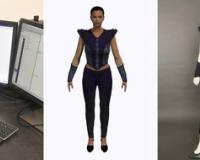 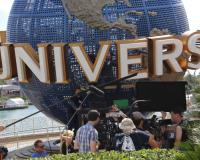 The Universal Studios Florida Production Group (USFPG) is celebrating the 30th anniversary of the state-of-the-art film and television production studio at the Universal Orlando Resort by dedicating the newly renovated screening theater to the... 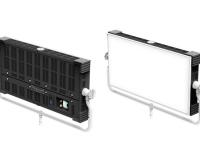 NBCUniversal LightBlade announced its newest LED product, the LB800, in partnership with Cineo Lighting.  As with their other LightBlade fixtures – the LightBlade 1K, the Ladder Light, and 1, 2 & 4 Blade configurations – the LB800 uses...

Universal Pictures and The Film Foundation announce a multi-year partnership to restore a handpicked selection of the Studios' classic titles. With this collaboration, Universal will fund the restorations as well as provide research and technical...