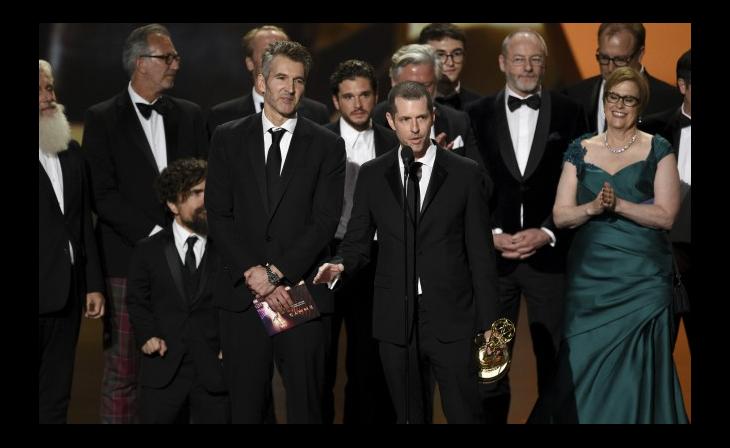 David Benioff, center left, and D.B. Weiss accept the award for outstanding drama series for "Game Of Thrones" at the 71st Primetime Emmy Awards on Sunday, Sept. 22, 2019, at the Microsoft Theater in Los Angeles. (Photo by Chris Pizzello/Invision/AP) 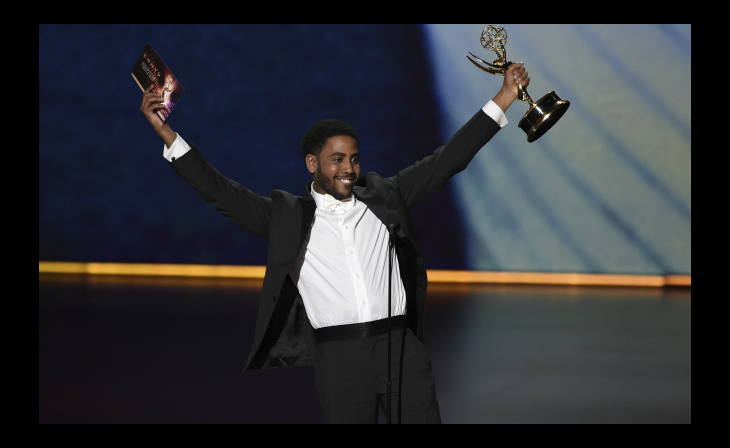 Jharrel Jerome accepts the award for outstanding lead actor in a limited series or movie for "When They See Us" at the 71st Primetime Emmy Awards on Sunday, Sept. 22, 2019, at the Microsoft Theater in Los Angeles. (Photo by Chris Pizzello/Invision/AP) 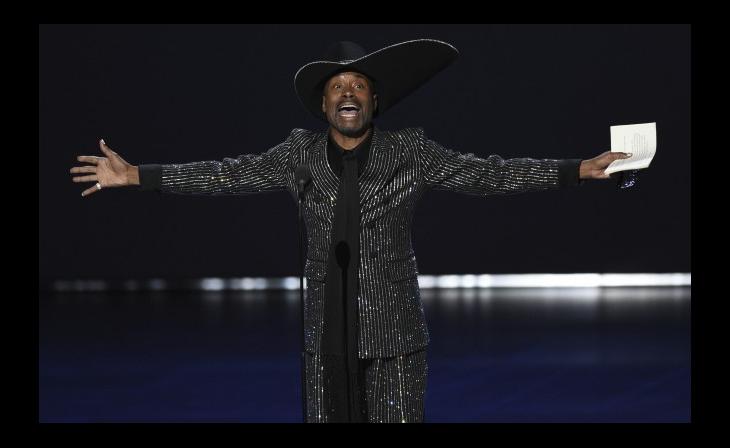 Billy Porter accepts the award for outstanding lead actor in a drama series for "Pose" at the 71st Primetime Emmy Awards on Sunday, Sept. 22, 2019, at the Microsoft Theater in Los Angeles. (Photo by Chris Pizzello/Invision/AP) 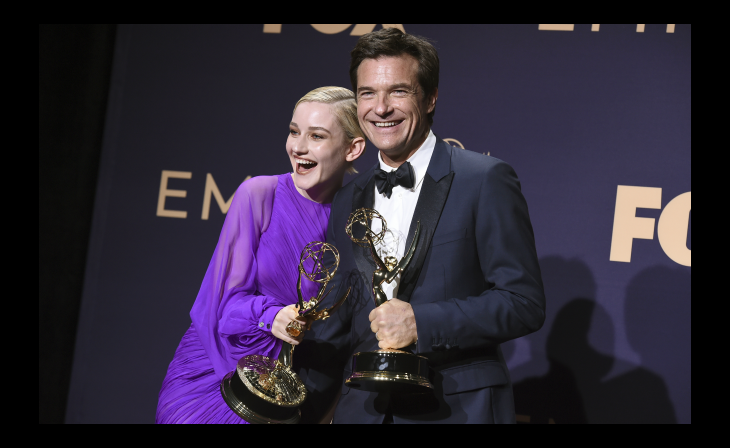 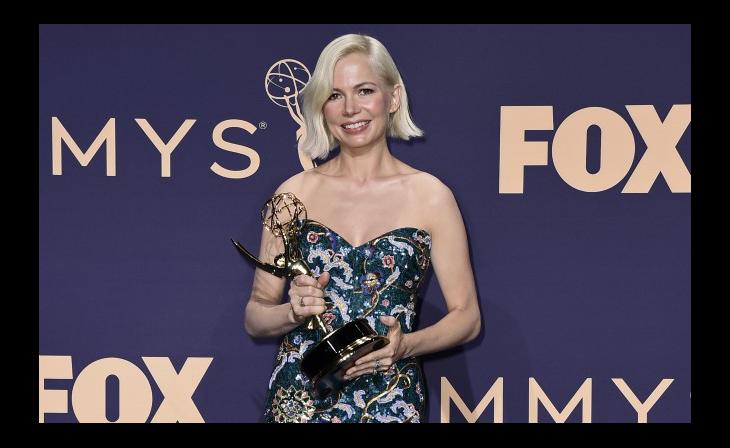 Michelle Williams poses in the press room with the award for outstanding lead actress in a limited series or movie for "Fosse/Verdon" at the 71st Primetime Emmy Awards on Sunday, Sept. 22, 2019, at the Microsoft Theater in Los Angeles. (Photo by Jordan Strauss/Invision/AP) 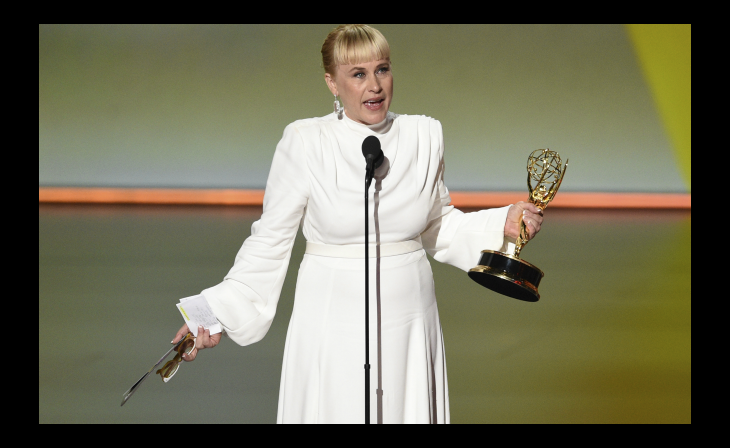 Patricia Arquette accepts the award for outstanding supporting actress in a limited series or movie for "The Act" at the 71st Primetime Emmy Awards on Sunday, Sept. 22, 2019, at the Microsoft Theater in Los Angeles. (Photo by Chris Pizzello/Invision/AP) 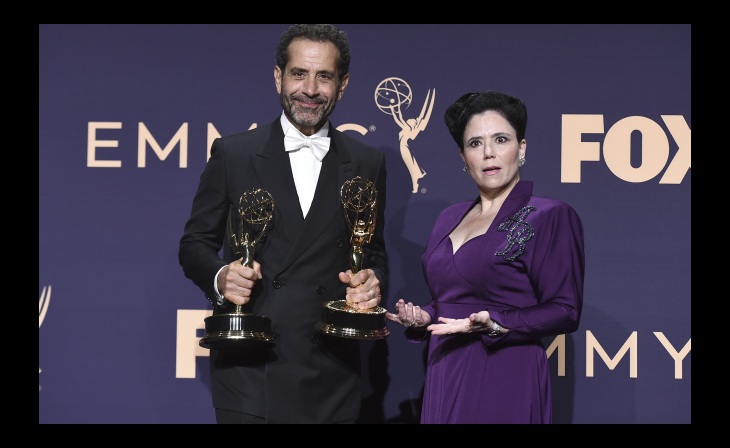 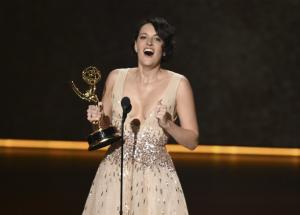 Phoebe Waller-Bridge accepts the award for outstanding writing for a comedy series for "Fleabag" at the 71st Primetime Emmy Awards on Sunday, Sept. 22, 2019, at the Microsoft Theater in Los Angeles. (Photo by Chris Pizzello/Invision/AP)
"Chernobyl" also enjoys strong showing as HBO tops the field with 34 Emmys, 9 during Sunday’s primetime ceremony

Game of Thrones went out on top, reigning as best drama at the Emmy Awards ceremony on Sunday (9/22) in Los Angeles. The HBO show earned a couple of honors last night, bringing its tally this year to a dozen Emmys--tying its own mark for the most garnered by a series in a single season. Game of Thrones earlier tallied 12 wins in 2015 and then again in ‘16. It is the most awarded show in primetime Emmy history.

Additionally on Sunday, Game of Thrones garnered a best supporting actor honor for Peter Dinklage--setting a record for most wins for the same role, four, breaking a deadlock with Aaron Paul for Breaking Bad.

Dinklage, who’s a dwarf, said in his acceptance remarks, “I count myself so fortunate to be a member of a community that is about nothing but tolerance and diversity, because in no other place I could be standing on a stage like this.”

Yet while the Game of Thrones’ swan song continued to lead the way, another show building momentum--particularly in season two--found itself in rarefied Emmy air for the first time: Fleabag (Amazon) which won for best comedy, best lead actress and best comedy writing, all for series creator Phoebe Waller-Bridge. Additionally Fleabag’s first episode earned Harry Bradbeer the Outstanding Directing for a Comedy Series Emmy.

Emmys’ sense of direction extended from Bradbeer to include: Jason Bateman for the Ozark (Netflix) episode “Reparations,” topping the directing for a drama series category; Don Roy King who took the directorial honor for variety series on the strength of NBC’s Saturday Night Live (the episode hosted by Adam Sandler); and Johan Renck who topped the Outstanding Directing for a Limited Series, Movie or Dramatic Special category on the basis of Chernobyl (HBO).

Meanwhile Billy Porter made history as the first openly gay man to win a best series drama acting Emmy--on the basis for his work on Pose (FX networks), a drama set in the LGBTQ ball scene of the late 1990s.

Making an impassioned plea for trans rights was Patricia Arquette upon accepting the Emmy as best supporting actress in a limited series or movie on the basis of her work in The Act (Hulu). “I’m grateful at the age of 50 to be getting the best parts of my life,” said Arquette, trying to stave off tears. “And that’s great but in my heart I’m so sad I lost my sister Alexis and that trans people are still being persecuted.” Alexis Arquette, a transgender person who had been living with HIV, died at age 47 back in 2016. Patricia Arquette said the she’s “in mourning every day of her life” for Alexis--”and I will be the rest of my life until we change the world” in terms of trans people being treated properly and being afforded employment and other opportunities.”

Backstage in the press room, Arquette expounded upon her remarks, sharing that trans people in America have an average life expectancy of 35 years. Much more, she affirmed, has to be done for this population.

Also bringing a social issue to the fore during her acceptance speech was Michelle Williams who won the best leading actress Emmy for her portrayal of Gwen Verdon in the FX limited series Fosse/Verdon. Williams thanked FX and Fox 21 Television Studios for showing her respect through not only creative support but also for compensating her financially with pay equal to that received by Sam Rockwell who played Bob Fosse. Williams said that the gender pay gap must be corrected in the industry and society at large. Williams said she felt paralyzed upon finding out that while she was paid $1,000 to reshoot scenes for 2017’s All the Money in the World, co-star Mark Wahlberg earned some $1.5 million for his additional work.

“The next time a woman--and especially a woman of color because she stands to make 52 cents on the dollar compared to her white male counterpart--tells you what she needs in order to do her job, listen to her. Believe her,” said Williams on stage, “because one day she might stand in front of you and say thank you for allowing her to succeed because of her workplace environment and not in spite of it.”

In the press room shortly after her acceptance remarks, Williams explained that if she as a white woman in a privileged industry experiences pay discrimination, imagine how much harder it is “for women of color across all industries” to cope with such unjust disparity.

Meanwhile, When They See Us, chronicled injustice relative to the wrongful conviction of the Central Park Five. Ava DuVernay created, wrote and directed the Netflix series based on a true story. A huge cheer erupted from the Emmy audience when it was announced that Jharrel Jerome won for best lead actor in a limited series for his portrayal of Korey Wise, one of the five black and Latino teenagers who were coerced in 1989 into confessing to a rape they didn’t commit. They were eventually exonerated some 25 years later.

The Central Park Five were at the Emmy ceremony; they stood and cheered Jerome. Wise himself was moved to tears.

Hoisting the Emmy, Jerome said, “This is for Raymond (Santana), Yusef (Salaam), Antron (McCray), Kevin (Richardson), and King Korey Wise. Thank you so much, it’s an honor. It’s a blessing.”

It’s believed that Jerome made history on a couple of fronts--becoming the first Afro Latino to win a best actor Emmy, as well as the youngest.

After Game of Thrones with a dozen overall Emmys and Chernobyl with 10, The Marvelous Mrs. Maisel tallied eight, followed by Free Solo with seven, and Fleabag with six. Tied at five were Saturday Night Live and Love, Death & Robots. And four series deadlocked at four Emmys each: Fosse/Verdon, Last Week Tonight With John Oliver, Queer Eye, and RuPaul’s Drag Race.

OUTSTANDING WRITING FOR A DRAMA SERIES
JESSE ARMSTRONG, Written by HBO
Succession
Nobody Is Ever Missing