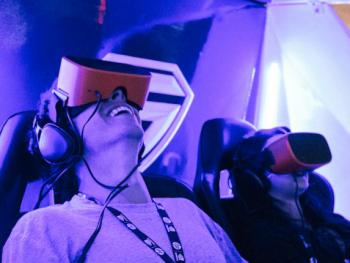 A VRLA attendee experiences another world

But sometimes lost in the wondrous advancements is what VR truly advances—a special connection to a story and the people in it. Engaged viewers can, for instance, choose to put themselves in the shoes of people whom they might never get to meet. VR enables us to break out of our at times insular worlds and delve into the experiences of others. There have been a number of shining examples, including The Displaced, a virtual reality experience produced for The New York Times which places viewers directly inside the global refugee crisis. And last year director Alejandro Gonzalez Inarritu received a special Oscar for the VR project he developed with DP Emmanuel Lubezki: Carne y Arena which simulates experiences of immigrants crossing the deserts of the American west.

Thankfully, this big picture perspective was presented at VRLA. Cosmo Scharf, co-founder of VRLA, now in its fifth year, touched upon the compelling dynamic of VR, using Steven Spielberg’s feature Ready Player One as a reference point. Scharf described the film as “a big deal for our industry,” raising awareness of VR. However, there’s a lesson to be learned, he noted, as the film shows a physical world falling apart as people are immersed in living life through their VR headsets. They are so obsessed that they are unaware of “the trash heap that their real planet has become.”

Scharf affirmed that VR and AR “can only exist as long as the planet is healthy enough to support us.” He cited ongoing wars, the assault on our environment, poverty, profit motives undermining health, and other issues. And while VR inherently offers “an advanced sense of presence,” it’s important that we “reclaim awareness of the present outside the headset.” He fosters hope that VR, with its sense of presence and ability to evoke empathy, can be part of healing society.

In that vein, Jon Snoddy, SVP of research and development at Walt Disney Imagineering, talked at VRLA about the convergence of VR and storytelling. He contended that the next generation of VR is not about more polygons or better headsets but rather the value of story. Snoddy affirmed that this story universe is not about the worlds but the people who live in them.