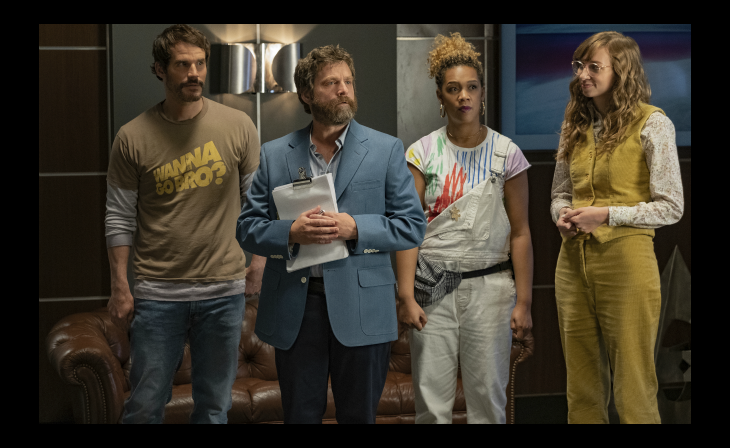 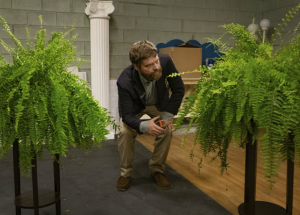 This image released by Netflix shows Zach Galifianakis in "Between Two Ferns: The Movie." (Adam Rose/Netflix via AP)

Some Netflix titles involve anguished discussion over whether the movie will also get a substantial theatrical release. This was not the case for "Between Two Ferns: The Movie."

"Netflix was like: Do we even want to put this on our platform? Maybe it should be a ringtone," jokes Zach Galifianakis, the celebrity-mocking star of the internet series and film.

But for many, the release of "Between Two Ferns: The Movie" is a cinematic event of mammoth significance. It promises a feature-film feast of a rare comedy candy that, since its 2008 inception, has been only dispersed randomly in 3-6-minute morsels. It's been five years since there were steady new episodes of the faux interview show, and there remains nothing quite like it.

When "Between Two Ferns" was last being made, its unique brand of low-rent, deadpan absurdity had reached the heights of power. In one episode, Galifiankis asked President Barack Obama how it felt "to be the last black president." In his 2016 sit-down with then-presidential candidate Hillary Clinton, he concluded with a raised eyebrow, asking: "What's the best way to reach you? Email?" And then he played the "You've got mail" chime.

Scott Aukerman, who co-created the Funny or Die series with B.J. Porter (it was spun off from a failed Fox sketch comedy show of theirs) and directs the film, grants there wasn't an urgent impetus for a movie of "Between Two Ferns." Brevity was always part of its genius. But the idea had appeal after he and Galifianakis were improvising for a Comedy Central special.

"We thought: If we could do a whole movie like this, it would be such a fun situation. So we just tried to trick a movie company into giving us money to shoot a movie like that," Aukerman said in an interview alongside Galifianakis. "We found the right mark and it ended up being Netflix."

"For me, it was just realizing 'Hangover 4' was never going to be made," adds Galifiankis.

"Between Two Ferns: The Movie," which premieres Friday on Netflix, was largely improvised; they started shooting with hardly any celebrity guests lined up. The movie concocts a backstory for the series as a local access show in rural North Carolina. There, Funny Or Die co-founder Will Ferrell demands 10 new episodes in two weeks after Galifianakis' interview with Matthew McConaughey goes awry, nearly killing the actor in the deluge of a broken pipe.

"It may be hard to believe but it's really difficult to land a huge A-list celebrity to be squirted in the face with water," says Aukerman. "McConaughey stepped up."

In the film, Galifianakis takes his show on the road to collect guests including Tiffany Haddish, Benedict Cumberbatch (he calls him "Benefit Lumberjacks"), Tessa Thompson (he calls her "Tesla"), David Letterman and Chance the Rapper. Galifianakis asks Chance if he has a brother named Community Chest the Rapper. To best-actress Oscar-winner Brie Larson, he wonders if she's "tried to aim higher by trying to win best actor." (Expect full episodes to later be released.)

"When I sit down — and these are people I mostly don't know — I know there are some heavy questions that could be offensive or bring back bad memories," says Galifianakis. "We're not into that but I kind of have to do that to see where the line is. There have been some questions that never made the sheet of paper because even to speak them now, I couldn't tell you what they were."

"Between Two Ferns" has long been an expression of Galifianakis' own misgivings about Hollywood and celebrity culture. The great irony is that the comedian's own fame has swelled considerably during the show's run. "The Hangover," Galifianakis big-screen breakthrough, came out a year after the first "Between Two Ferns," with Michael Cera.

"We're coming from a position where Zach is a rich celebrity and I'm a hanger-on," says Aukerman, the widely respected comedian and host of the "Comedy Bang! Bang!" podcast.

Galifianakis lets out a loud sigh. "Can you put a giant sigh in the article, please?" he says.

A decade of doing "Between Two Ferns" has given both a reason to consider the shifting trends of celebrity. "Now one's the president," says Galifianakis.

"It's gone to a place where celebrities are trying to con the public into thinking that they're regular Joes by appearing on things like Carpool Karaoke," says Aukerman. "It's all a huge scam. Celebrities love to be treated like they're special people — the one to my left especially."

It hasn't always been easy to find the right balance between radically inappropriate and genuinely hurtful. Guests aren't given any advance notice of questions, but they're encouraged to lob abuse back at Galifianakis. But getting to the most awkward places can mean overstepping.

After speaking with Jennifer Aniston before an episode, they decided to drop the Brad Pitt impersonator they had ready. (Asked by Galifianakis if he did anyone else, the impersonator immediately replied "Colin Farrell.") Five minutes before the Obama interview, Galifianakis told Aukerman he couldn't do the "last black president" question only to be reassured by a White House speechwriter that it had been approved.

"People now are so used to being mean to each other online and have no filter with that," says Galifianakis. "When we first started, it was kind of unique because everyone was sucking up to celebrities and so obsequious. I hope that we're not contributing to that kind of culture."

They've had to defend their process, though. When a company considering advertising with the show — "a major car manufacturer that rhymes with Board," says Aukerman — they pulled out when their creative control was even slightly threatened. Clinton's people requested no email questions. After the Obama taping, the White House urged that the video be entirely about the Affordable Care Act. "We just said no," says Galifianakis.

Anyone worried that "Between Two Ferns" has softened with time need not worry. McConaughey, for example, is asked if, when he's with Woody Harrelson, he worries that "somewhere there's a sack not being hacked."

Yet the experience of "Between Two Ferns" has only elevated their respect for the movie stars they ridicule.

"What's so interesting is that I always think actors have attitudes," says Galifianakis. "But I have to say, all of these people, they're just professionals."

Aukerman is equally impressed. "I started to feel like doing this movie is part of their community service or something."