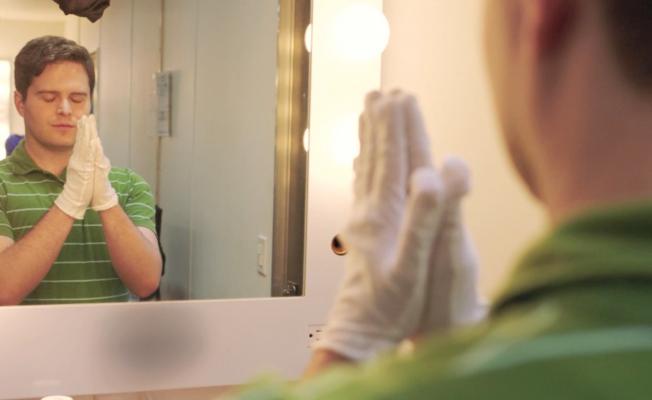 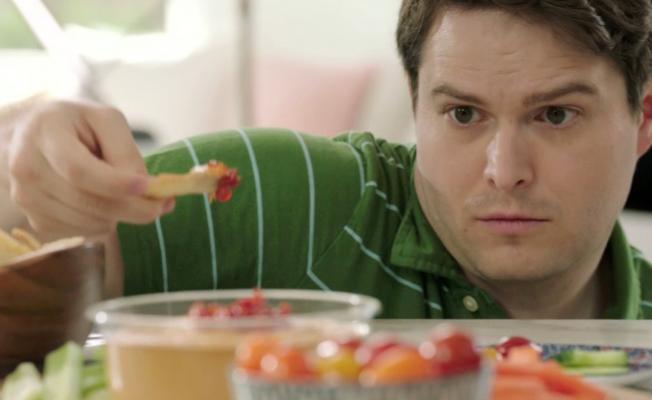 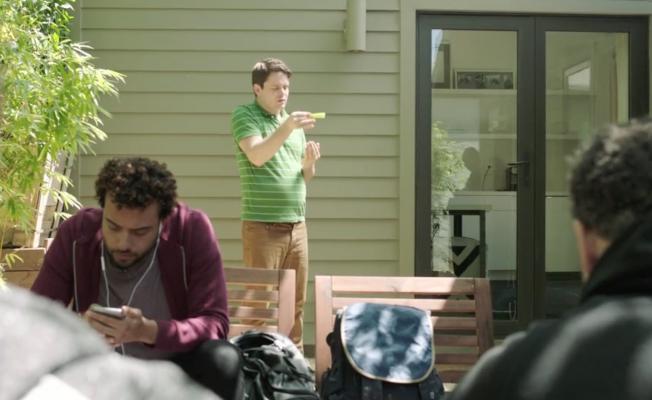 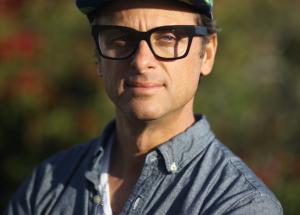 Writer/Director Josh Miller and real-life hand model Erich Lane are back for a new episode of “Handy,” the branded content series seen on Comedy Central that offers a comedic take on the day-to-day travails of a working hand model trying to make it in hyper-competitive Hollywood. The latest episode, which premiered on Saturday, May 13, finds Lane’s character, Erik Thomas Layne, plying his craft on the set of a commercial for Sabra Hummus, who sponsored the episode.

For Miller, who began his career as an advertising Copywriter and Creative Director with such top agencies as Cliff Freeman & Partners and Team One, before turning to directing full-time, “Handy”, and branded content, have proven to be an excellent vehicle for his full range of story-telling and marketing skills.

Case in point, in the new episode Erik is on the set of a new Sabra Hummus commercial where he faces several challenges; to not only nail the “swoosh and scoop” product shot, but also portray the hands of an entire family, including a boy and a mom, which involves the humiliation of red nail polish.

Miller explains the whole idea of the “swoosh and scoop” (as opposed to “dip and scoop” as the director in the spot, acclaimed comedic actress Annie Sertich, mistakenly calls it) was inspired by an actual script note from Sabra.

“With ‘Handy,’ I can embrace any brand attribute or client note and incorporate it into the episode in a way that’s authentic - and entertaining,” Miller says. “In this episode, the food stylist actually corrects the director and launches into a detailed description of the ‘swoosh and scoop’ method in which you ‘dip the carrier in a full semi-circle, twisting at the end’ while Erich looks on intently, offended that someone’s telling him how to “practice his art”. In the initial script, I referred to it as ‘dip and scoop,’ and Sabra corrected it instead calling it ‘swoosh and scoop.’ I thought that distinction was funny, so I used it in the episode. It’s funny and perfectly on-message for the brand.”

‘Handy’ History
Inspired by Miller and Lane’s real-world work together on a Red Vines Bites ad in 2015, Miller envisioned a mockumentary about the life of a likable yet self-important hand model trying to make his mark in Hollywood. The resulting short film, “Hand Job: Portrait of a Male Hand Model,” written and directed by Miller and starring Lane, found success at several major film festivals including the Seattle International Film Festival, Hawaii International Film Festival and San Francisco Indiefest.

Following its festival run, Miller realized the concept relevant in the then-emerging world of branded entertainment content. He pitched the concept with his management company Principato Young Entertainment, and production company Kids At Play, and found a willing media partner in Comedy Central. Each ‘Handy’ episode is two and a half minutes, comprising an entire commercial break.

“I feel like in the last couple episodes we’ve unlocked a rhythm and structure to these that has been the culmination of several things: my use of 2 cameras to always capture Erich’s reactions, which are not always in the script but often hilarious; an editing style that we’ve refined with each episode; and Erich’s character development. I’m looking forward to continuing the series and helping Comedy Central make them a success for the network and our.”

About Josh Miller
Josh Miller is an American commercial and content director who leverages his years of experience as an award-winning copywriter/creative director and a lifelong passion for film and photography to tell entertaining human-driven visual narratives. His contemporary aesthetic coupled with his unique talent with performance enables him to visualize enduring stories that are honest, poignant, humorous, and faithful to the core truth of the concept. Josh is represented for commercials by Spears and Arrows.